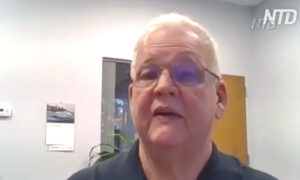 Robin Hall was an observer at Fulton County at the Georgia World Congress Center. Hall said on Dec. 9 that she personally witnessed irregularities in the November election.

She said in her testimony: “There was one foot to two feet high of Biden votes, and there be zero Trump stacks, or maybe four at the max.”

“The ballots looked perfect, pristine. The paper was flat, didn’t look like they’d been folded. The mark on it was perfectly in the dot, did not look like a human did it.”