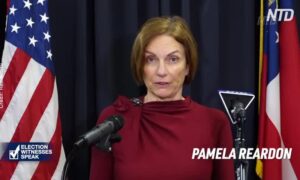 Hale Soucie is a resident of Cobb County, Georgia, and he served as a volunteer recount monitor during the recount process in Cobb County as well as in Fulton County. He said on Dec. 9 that he personally witnessed irregularities in the November election.

Soucie said in his testimony: “When the recount started in Cobb. One of the first things that I noticed was the increasingly hostile tendencies of the auditors, the table managers, and people at the entire GMR Miller facility while we’re doing the recount process. At one point from 2:09 to 2:12, I observed a table, the first person at the table, the auditor who is supposed to call out the vote initially, the other person is then supposed to confirm it. Well, that first person, three times in three minutes from 2:09 to 2:12 on I think it was the 14th. She called three Trump votes for Biden. So that’s three votes that should have been for president Trump went to president Biden.”

“As I continued around the room, I saw more and more auditors were becoming aware of me, table managers were becoming aware of me as well, and they were pointing me out where I was in different parts of the room. So as I came back around to that first table in question, I heard … the auditor talking to the other auditor and she said, ‘I’m paid by the taxpayer and this f’ing a-hole wants to come in here and watch me.'”

He also observed that “several of the tables, they had an 8 to 10-inch stack of purely Biden votes. One, in example, had not a single solitary Trump vote.”