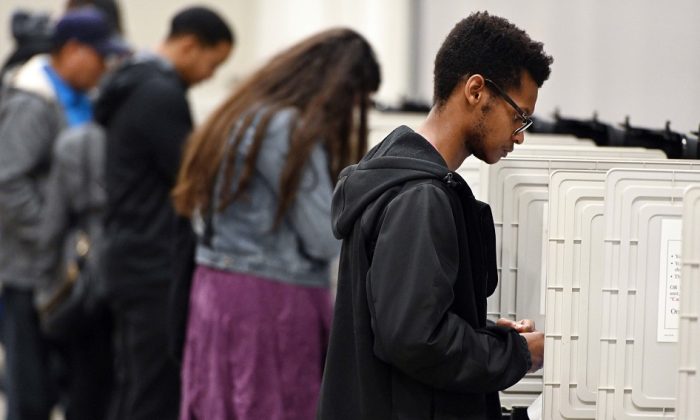 People cast their ballots ahead of the Nov. 6, general election at Jim Miller Park in Marietta, Ga., on Oct. 27, 2018. AP Photo/Mike Stewart, File
US News

ATLANTA—Georgia voters who want hand-marked paper ballots are challenging the new election system that state officials are rushing to implement in time for next year’s presidential primaries, saying the new touchscreen machines remain vulnerable and their results unverifiable, even though they produce paper records.

Secretary of State Brad Raffensperger announced the state’s purchase of a $106 million election system from Denver-based Dominion Voting Systems last month, with plans to replace the outdated election management system and paperless touchscreen voting machines in use since 2002. He then certified the new system on Aug. 9, and said it will be in place in time for the March 24, 2020, primaries.

The voters’ petition, seeking a withdrawal of the certification and a re-examination of the Dominion system, was submitted Aug. 19 to Raffensperger’s office. It says the system doesn’t meet Georgia’s voting system certification requirements and doesn’t comply with the state election code.

Georgia law allows voters to request that the secretary of state “reexamine any such device previously examined and approved by him or her” as long as at least 10 voters sign onto the request. The submitted petition includes signatures of more than 1,450 registered voters from 100 counties, including some elected officials, and was filed by voting integrity advocates and the state Libertarian Party.

Additionally, some of the plaintiffs in a lawsuit challenging the state’s outdated voting system filed an amended complaint on Aug. 16 asking U.S. District Judge Amy Totenberg to prohibit the state from using the new Dominion system, calling it “illegal and unreliable.”

Raffensperger, in a statement, said the allegations are false and not supported by facts. The state required that voting systems submitted for consideration be federally certified prior to review and the state certification was “a re-examination to confirm the accuracy of the federal certification,” he said.

“At the end of the day, the complaints are raised by activists who want the implementation of Georgia’s new voting system to fail,” he said. “The Secretary of State’s office, on the other hand, is focused on implementing the new system in time for the 2020 elections. Every Georgia citizen who cares about secure and accurate elections should reject these ridiculous tactics.”

In a 153-page order last week, Totenberg ordered the state to stop using its outdated system after the end of this year, calling it “antiquated, seriously flawed, and vulnerable to failure, breach, contamination, and attack.”

The petition and the amended lawsuit both take issue with the fact that while the paper record printed by the new voting machines includes a human-readable summary of the voter’s selections, the scanner tallies the votes based on a machine-readable code. Voters can’t be sure that the code on the paper accurately reflects their selections, and meaningful audits can’t be done, they argue.

The law that Gov. Brian Kemp signed in April says “electronic ballot markers shall produce paper ballots which are marked with the elector’s choices in a format readable by the elector.” That means the new machines don’t comply with the state election code, the petition and amended complaint say.

Also, the new system isn’t much safer than the system Totenberg ordered the state to stop using, the amended lawsuit says. Vulnerabilities could cause the machines to print codes that don’t match a voter’s selections, or could cause a scanner to improperly tabulate votes, it says.

By choosing to move forward with the Dominion system, the amended lawsuit says, state officials “willfully and negligently abrogated their statutory duties and abused their discretion, subjecting voters to cast votes on an illegal and unreliable system—a system that must be presumed to be compromised and incapable of producing verifiable results.”

The petition filed Aug. 19 also says Raffensperger improperly certified the Dominion system after failing to designate a certification agent; failing to issue a report prior to certification; using the wrong technical testing standards; failing to certify electronic poll books, which are an integrated part of the system; and failing to include security testing.

Another problem the petitioners point to is that Dominion’s system records ballots in chronological order, with timestamps kept on memory cards in encrypted records. Election insiders or hackers with access to decrypted data could use these records to connect a voter with his ballot, violating the requirement for secret ballots, the petition says.

“Voters will no longer tolerate unauditable electronic voting systems in Georgia, and are taking back control of their elections through actions like this petition that officials cannot ignore,” said Marilyn Marks, executive director of the Coalition for Good Governance. The organization was a driving force behind the petition and is a plaintiff in the lawsuit before Totenberg.