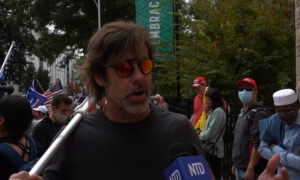 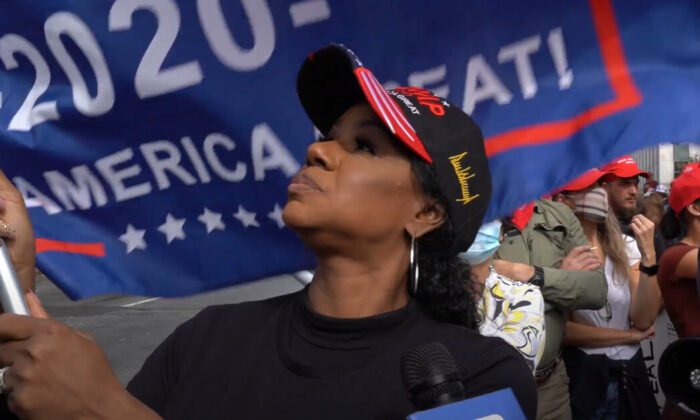 ATLANTA—Mykel Barthelemy says she’s been involved in politics all her life; her mother was a political activist for the Democratic Party, though Barthelemy herself never agreed with the Democratic Party platform. She joined a Stop the Steal rally in Atlanta, Georgia on Nov. 7, 2020 with her Trump hat, flag, and shirt.

“I’m here today because I believe in our republic, and I believe that this election was rigged, I believe that we were scammed out of the votes based on lots of evidence all across the board,” Barthelemy said, referencing videos of ballot dumping, glitches in ballot machine software, lawsuits, and so on.

“I believe we were robbed of our votes, this is a republic and I believe in a free and fair election,” she said. “If Donald Trump lost legitimately we would accept that, but we feel our freedoms are at stake because we don’t have a free and fair election, based on this last election coverage. So that’s why I’m here, to support our president and to support the country.”

“How is it that when all of the ballots were brought in the day after the election, no incumbent Republicans or Democrats lost their seats yet we’re seeing the seat flip for the presidency? It seems pretty suspicious and it seems like it’s mathematically, statistically impossible for the votes to fluctuate for President Donald Trump and Joe Biden and not to fluctuate for the whole ticket,” Barthelemy said.

Barthelemy said she plans to join the movement again in Washington on Nov. 14, 2020.

“Stop the steal!” she said.