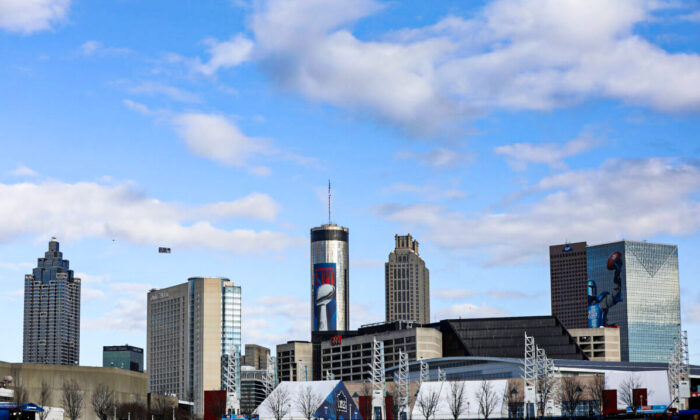 A general view of the skyline is seen at Mercedes-Benz Stadium in Atlanta, Georgia, on Feb. 03, 2019. (Streeter Lecka/Getty Images)
Economic Policies

Georgia Tries to Be Less Taxing

Georgia, with its strong economic recovery from the CCP (Chinese Communist Party) virus pandemic, may become the 10th state without a state income tax.

“The time has come to abolish the Georgia state income tax,” wrote Newt Gingrich, a former U.S. speaker of the house and a Georgia resident.

What is the allure of a state without an income tax? And why is it under debate in several states?

A tax analyst says generally states without an income tax perform better than those with one.

“Overall, states that go without an individual income tax have done better than states that have one in terms of GDP growth and in terms of immigration,” Katherine Loughead, a senior policy analyst with the Tax Foundation, told The Epoch Times.

“The benefits of living in a no-income-tax state are kind of obvious,” according to financial education firm Ramsey Solutions in Franklin, Tennessee.

“First of all, you get to keep more of your paycheck, and that’s always a win! Not to mention that you’ll save a little money when you file your taxes because you won’t have to file a state income tax return on top of your federal return,” the firm writes in its commentary “States Without Income Tax.” It also says that many states without an income tax usually have a “climate that creates jobs and attracts new residents from all over the country.”

“Despite the pandemic, Georgia ends the fiscal year with a record $3.2 billion jump in revenue,” Gingrich noted a March 10 Atlanta Journal-Constitution article. He noted that the “state saw revenue grew 13.5% over 2020.”

The Peach State’s economy, an observer said, is making a strong recovery.

“The number of unemployed people in November this year has dropped by almost 49 percent compared to November 2020,” she added. “That is the strongest recovery in the country.”

Compared to pre-pandemic times, Gonzalez adds, “there was a drop of about 15 percent in the number unemployed. The current Georgia jobless rate is 2.8 percent, the eighth-lowest nationwide, and significantly below the average of 4.2 percent.”

Stephen Moore, an economist with the Heritage Foundation, said Georgia should consider what states without income taxes have accomplished.

“For the last 30 years, these states have on average had much higher income gains, more jobs created, and more population gains than states with income taxes,” Moore said. The U.S. Census Bureau reports that some 3.2 million Americans moved to one of the income-tax-free states between 2010 and 2019, he added.

Georgia, Moore contends, should also consider its nearest competitors. Neighbors Tennessee and Florida have no state income tax, he said. “Nothing would help grow the Georgia economy more than abolishing the income tax.”

Several states have recently debated the examples set by Texas and Florida, which have had no state income tax for decades. Six other states have no income tax or are phasing them out. These are Alaska, Wyoming, Washington, Tennessee, Nevada, and South Dakota. New Hampshire is a no-state-income-tax state that taxes interest and dividends, but that’s slated to end by 2027.

Other states are also considering ending state income tax. In 2020, Mississippi and West Virginia considered it but decided against it. Still, Loughead says there is a general movement in many states to end the state income tax or at least cut taxes.

In 2020, she said, 13 states had some form of income or corporate tax reduction. Only two raised taxes. One was New York. It’s now generally considered the highest taxed state in the nation. Still, Loughead says the trend is the opposite.

“Owing to the growth of Florida and other no-state income tax states, there is definitely a competitive issue forcing states to consider finding ways to lower, or possibly eliminate, some taxes,” she said.