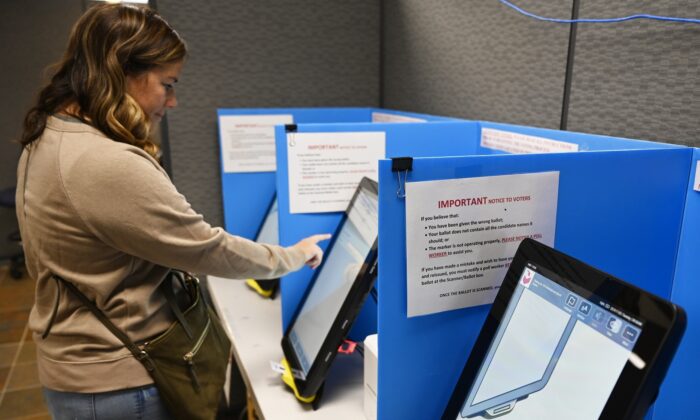 CARTERSVILLE, Ga.—New voting machines that combine touchscreens with a printed ballot were tested for a handful of local elections in Georgia on Nov. 5, part of the state’s rush to meet a court-ordered deadline to retire its outdated paperless system before any votes are cast in 2020.

The way Georgia conducts elections next year will be closely watched nationally after the officials faced a torrent of criticism in 2018. Problems included hours-long waits at some polling sites, security breaches that left voters’ registration information exposed and accusations that strict ID matching requirements and registration errors suppressed turnout. That led to lawsuits and changes in state law that included switching election systems.

A federal judge in August upped the pressure for a new system. U.S. District Court Judge Amy Totenberg gave Georgia until Jan. 1 to retire the election system in use since 2002, calling it “seriously flawed.”

Election officials in counties chosen to test the new machines reported a few problems Nov. 5 and in the preceding three weeks of advance voting.

In Bartow County, some poll workers during early voting had trouble finding the power button on the new machines and had one ballot scanner fail, said Joseph Kirk, the county elections supervisor. He said there were also a few minor issues getting started.

“We expect to see some problems in a pilot,” Kirk said. “But nothing has been insurmountable, nothing has delayed anyone’s voting experience.”

Thomas McCoy, a 55-year-old machinist, cast his first votes on one of the new machines in Cartersville. He called the new system “great, easy,” and said he was glad to be rid of the paperless machines after one malfunctioned on him in a prior election.

“This one I could actually print it out and look at it and knew right off the bat this was where I was going,” McCoy said.

Though the new machines create a paper record, a positive trial run isn’t likely to satisfy advocates for greater election integrity. They insist the new system remains vulnerable and fails to deliver the auditable results they demand.

“Even if everything goes smoothly, that doesn’t solve the problems,” said Marilyn Marks, executive director of the Coalition for Good Governance.

The new machines work similarly to the old ones, with voters making choices on touchscreens.

But the new machines, unlike the old, print a paper ballot with a list of each vote cast and a computer code designed to match those choices. That printout is inserted into a scanner that reads the code and stores the votes electronically for tabulation. Printouts are retained in case an election must be audited later.

Some of those getting familiar with the system noted the typeface on the new printed ballots might be small for some eyes. Lowndes County, near the Georgia-Florida line, had magnifying glasses on hand for voters if needed, said Tiffany Linkswiler, the assistant elections superintendent.

Linkswiler and Heard in Decatur County said a few voters making final checks caught mistakes. The erroneous ballots were voided and they cast new ones.

“We had two spoiled ballots, which shows me at least two voters paid attention to their ballots after they printed them out,” Heard said. “So that’s a good sign. It means there’s that opportunity” to correct errors.

But Marks said poll observers for the Coalition for Good Governance saw many voters scan ballots without bothering to check them for accuracy. If computer-generated ballots are cast without voters reviewing them, she said, audits are meaningless because “you don’t know what the voter intended.”

Advocates, including Marks’ group, and individual Georgia voters who sued over the state’s old machines are now challenging the new ones in court. They are asking the judge to stop the statewide rollout of the new machines.

The judge also ordered Cobb County in suburban Atlanta to run a different test Nov. 5, using hand-marked paper ballots that are scanned electronically. That’s the kind of system Marks’ group is recommending, but the judge ordered it tested only as a fallback, in case Georgia doesn’t have the new machines ready for the March primaries.

By Ben Nadler and Russ Bynum