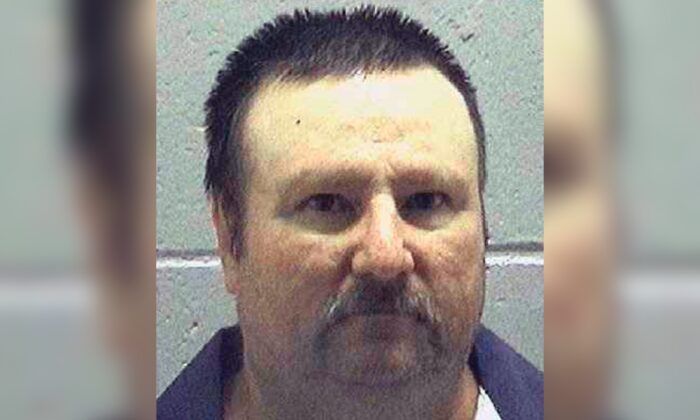 Jimmy Fletcher Meders in an undated file photo. (Georgia Department of Corrections via AP)
US News

ATLANTA—Corrections officials in Georgia are preparing to execute a man convicted of fatally shooting a convenience store clerk more than 30 years ago.

Jimmy Fletcher Meders, 58, is scheduled to receive a lethal injection Thursday evening at the state prison in Jackson. He was convicted of murder and sentenced to die for the October 1987 killing of Don Anderson in coastal Glynn County.

Meders’s lawyers tried to get a court to order DNA testing on the gun used in the killing, saying that it could prove he wasn’t the shooter and should have a new trial and sentencing. But a judge last week rejected that argument, saying there was “overwhelming evidence” in support of Meders’s conviction.

His lawyers also filed a petition challenging the constitutionality of his sentence. They argued that sworn statements from every living trial juror able to remember the trial show they would have imposed a sentence of life without the possibility of parole if that had been an option at the time. They also argued that statewide sentencing data shows that juries no longer impose death sentences in cases like his. A county judge on Monday dismissed that petition.

Meders’s attorneys have asked the Georgia Supreme Court to allow them to appeal both rulings.

Meders’s attorneys also asked the State Board of Pardons and Paroles to spare his life by converting his sentence to life without the possibility of parole. The parole board is the only authority in Georgia that can commute a death sentence. The board held a closed-door clemency hearing Wednesday and was expected to announce its decision Thursday.

In the clemency application, Meders’s attorneys again argued the jury would have chosen life without parole if possible and that a crime like his likely wouldn’t be a death penalty case today.

They also noted he had no criminal history before Anderson’s shooting and had served his country in the National Guard for seven years.

Meders spent the afternoon of Oct. 13, 1987, drinking alcohol with three men: Randy Harris, Bill Arnold, and Greg Creel. After leaving Harris and driving around for hours, Meders, Creel, and Arnold ended up at a convenience store about 2:30 a.m. the next morning.

While they were there, Anderson was fatally shot in the chest and head, and more than $30 was taken from the cash register, according to authorities.

Meders testified at his trial that all three men went inside, and Arnold shot Anderson and told Meders to grab the cash. Arnold and Creel both testified that only Creel and Meders entered the store, and Meders shot the clerk and took the money.

Harris, who wasn’t at the store, testified that Meders confessed to him afterward that he had “blowed a man’s head off over $38.”

Meders was the only one charged in the robbery and killing.

Meders would be the first inmate executed in Georgia in 2020. The state executed three men in 2019.

Georgia’s execution protocol calls for a lethal injection of the sedative pentobarbital.