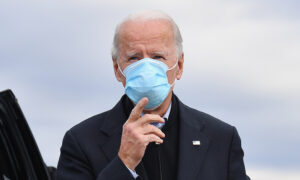 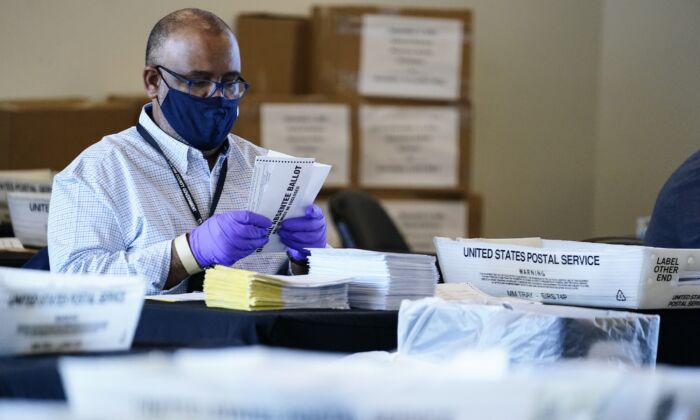 An election inspector looks at an absentee ballot as vote counting in the general election continues at State Farm Arena in Atlanta, Ga., on Nov. 4, 2020. (Brynn Anderson/AP Photo)
2020 Election

Georgia Secretary of State Brad Raffensperger announced on Tuesday afternoon that the state still has more than 47,000 ballots to be counted.

“With counting continuing in numerous counties throughout #Georgia, as of 2:15 p.m. today there are approximately 47,863 ballots still outstanding,” Raffensperger, a Republican, wrote on Twitter.

Should Biden win the state, it makes the former vice president’s chances of winning the election much greater.

No news organization or agency has called the race for either candidate.

“Officials in numerous counties are continuing to count ballots, with strong security protocols in place to protect the integrity of our election,” said Raffensperger earlier in the day. “We’re on pace to accomplish that responsibly, ensuring that the voice of every eligible voter is heard.”

“This is a long process, but we can all agree that having an accurate and fair count is much more vital than having a fast count,” Raffensperger added.

The Trump campaign filed a lawsuit in Georgia seeking to halt the vote count. He filed suits Wednesday in Michigan, Pennsylvania, and Michigan, while asking for a recount in Wisconsin.

On Wednesday, Trump alleged that he won Georgia.

“It’s … clear that we have won Georgia. We’re up by 2.5%, or 117,000 (votes) with only 7% (of the vote) left” to go, he said on Twitter. He also claimed victory in North Carolina and Pennsylvania, although neither state was called for him.