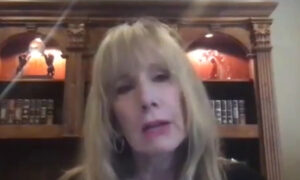 Debbie Fisher from Cobb County, Georgia, worked during the general election, the hand recount, and the machine recount in her county. She was a member of the voter review panel for the Nov. 16 hand recount, and she noticed something suspicious about the batch of military ballots she handled.

“I reviewed 298 military ballots on Nov. 16. One thing after I had seen several that I noticed was they were exceptionally clean. I was comparing them to the ballots that I had seen during the general election that didn’t even come close to comparing to these ballots,” she said. “What I found was, there were bubbles on the ballots that were filled in perfectly, there was almost none that went outside the lines. There were no stray marks like we found on the ballots during the general election, such as x’s or checkmarks Not one ballot that I looked at had any kind of markings other than black. The circles were perfectly colored in,” she said.

When she reported the issue to the elections director, “I was told that the ballots can not be marked by a machine, because the military ballots in Cobb County had to be mailed.”

She estimated 80 to 90 percent of the military ballots were marked for Joe Biden. She also said she saw stacks of ballots that were 100 percent for Biden.

“I almost cried, of all the votes, of all the people in this country to have their votes disregarded, or to fraudulently submit a ballot for the very men and women who fight to give us the right to vote. It made me physically sick to my stomach,” she said.

She also alleged problems with the watermark on military ballots and an uncooperative behavior from the election supervisors.