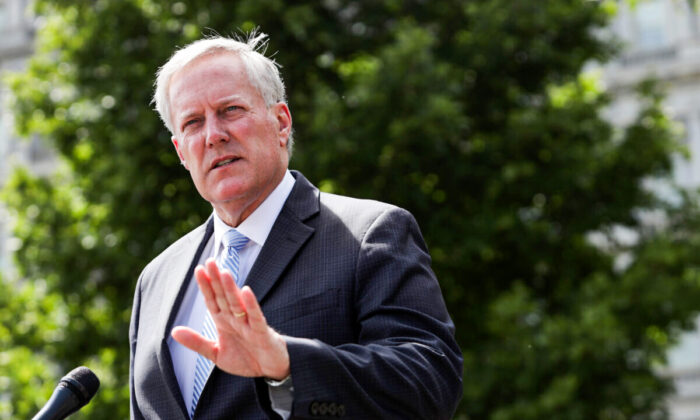 White House Chief of Staff Mark Meadows speaks to members of the press outside the West Wing of the White House in Washington on Aug. 28, 2020. (Alex Wong/Getty Images)
Politics

The Georgia district attorney investigating former President Donald Trump and his allies for challenging the results of the 2020 election has filed a petition seeking testimony from former White House Chief of Staff Mark Meadows, according to court documents obtained by Politico.

Meadows, a Republican, served as a House representative for North Carolina from 2013 to 2020 when he resigned to join the Trump administration as White House chief of staff.

In the court filing, Willis wrote that Meadows is a “necessary and material witness” to the investigation due to his affiliation with Trump and the Trump campaign and the fact that he was in “constant contact” with the former president in the weeks following the November 2020 election.

In the court filing (pdf), Willis said that Meadows attended a meeting at the White House with Trump and other members of Congress where they discussed “allegations of voter fraud and the certification of the electoral college votes from Georgia and other states.”

She pointed to a Dec. 21 tweet where he stated that “several members of Congress just finished a meeting in the Oval Office with President Trump, preparing to fight back against mounting evidence of voter fraud.”

Willis also cited emails Meadows sent to Justice Department officials in which he made “allegations of voter fraud in Georgia and elsewhere” and a phone call that he participated in along with Trump and Georgia Secretary of State Brad Raffensperger in January 2021 in which they discussed alleged voter fraud in Georgia.

Willis says that during the call, Trump said he wanted to find the nearly 12,000 votes needed to win the state.

Meadows was also present at the Cobb County Civic Center in Georgia in December 2020 where election officials were conducting an audit of absentee ballots, Willis said.

Willis has been working with the grand jury to probe attempts by Trump and a number of his allies to convince officials in Georgia to investigate possible fraud following the 2020 election.

She asked the grand jury for help with the probe, which she says is based on information that indicates “a reasonable probability” that the election in Georgia was “subject to possible criminal disruptions.”

Willis says the investigation is based on a “multi-state, coordinated plan by the Trump campaign to influence the results of the November 2020 elections in Georgia and elsewhere.”

Meadows and Powell are among Trump’s closest allies who have been asked to testify in the investigation, along with Sen. Lindsey Graham (R-S.C.) and attorney Rudy Giuliani, who represented Trump during the 2020 election.

Giuliani appeared before the special grand jury on Aug. 17.

Another court filing states that publicly reported emails have linked Powell to an effort to obtain voting machine data in Georgia (pdf).

A court filing for Waldron points to his appearance before Georgia lawmakers in December 2020, where he testified about “purported vulnerabilities” in Dominion voting machines used throughout Georgia in the 2020 election (pdf).

The petitions for testimony serve as precursors to subpoenas because the witnesses do not live in Georgia, The Associated Press reported. Although they have been summoned to testify, the witnesses may still challenge the move.

The Epoch Times has reached out to Meadows’s attorney and Epshteyn for comment. Powell and Waldron could not be reached for comment.