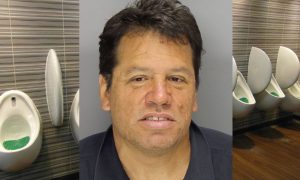 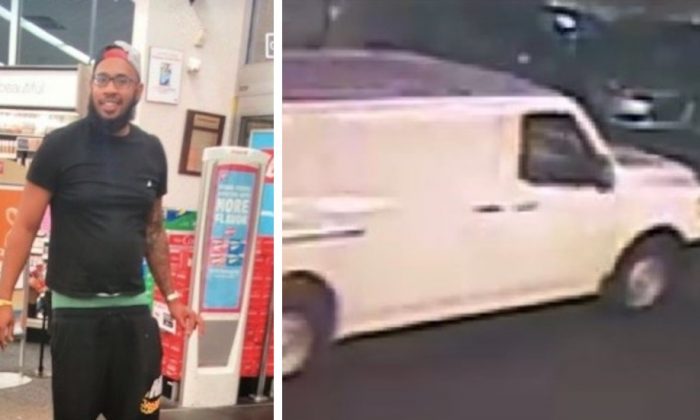 Suspect in attempted kidnapping at a Smyrna Walgreens on July 27 and the vehicle into which the suspect allegedly tried to lure two female victims. (Smyrna Police Department)
Crime and Incidents

Georgia police have released surveillance photos of a man who allegedly tried to kidnap two women outside a Cobb County Walgreens pharmacy.

Smyrna police said in a statement that on Saturday, July 27, an unidentified black man attempted to lure two black female customers into a cargo van.

The disturbing incident happened around 9 p.m. at 2670 Cobb Parkway in Smyrna and the suspect was captured on cellphone video.

The suspect is described as a black male with a light skin complexion, full beard, and wearing glasses. His left arm is covered in a full-length tattoo.

He was last seen wearing a light color baseball cap, black T-shirt, and black shorts with a white and yellow Nike logo on the left side of the shorts.

The vehicle the suspect allegedly tried to lure the young women into has been identified as a white Nissan.

Police are seeking the public’s help identifying the man.

Woman Tries to Kidnap Kids at Airport, Parents Wrestle Her Down

The incident follows the case of a woman who was arrested on June 22 for attempting to kidnap two children at Atlanta’s Hartsfield-Jackson International Airport while the parents wrestled to protect them.

Esther Daniels walked over to where the family was standing and tried to snatch a stroller with a child sitting in it. The shocking surveillance video taken inside the airport shows the child’s mother fighting with Daniels.

When she couldn’t grab the first child, she tried to lift the family’s second child, and this time the child’s father stepped in, reported WSBTV.

The Atlanta Journal-Constitution reported that the baby in the stroller was a girl while the other child was a 6-year-old boy.

At that point, an Atlanta police traffic control officer who witnessed the commotion ran across the airport atrium to prevent the kidnapping and then ran after Daniels.

Three other officers put her down on the ground before arresting her and taking her away in a wheelchair.

The officer said Daniels was “experiencing mental distress” and was taken to a hospital before being transported to the county jail, reported ABC7.

It says, based on the identity of the abductor, there are three types of kidnappings—family kidnapping where the child is abducted by someone from within the family, acquaintance kidnapping, and stranger kidnappings.

“In 80 percent of abductions by strangers, the first contact between the child and the abductor occurs within a quarter-mile of the child’s home,” said Parents.com.