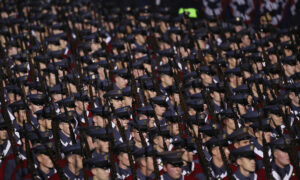 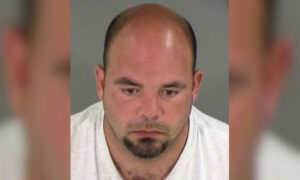 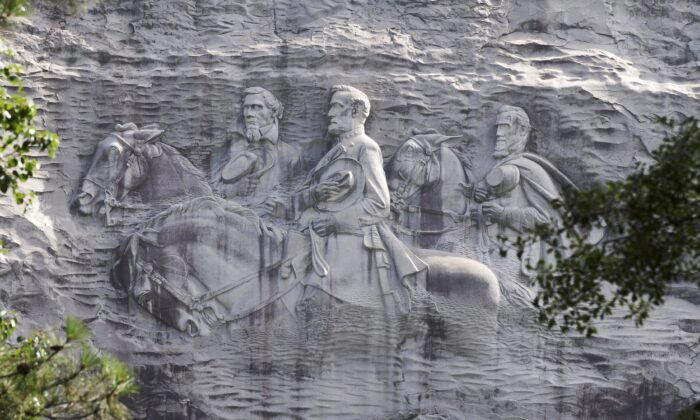 Georgia Park With Confederate Sculpture Shuts Down Ahead of Planned Rally

A park with a huge Confederate sculpture was closed on Saturday as demonstrators planned on holding a rally in support of the monument.

“While the city has little information what to expect during this time, out of an abundance of caution we are asking the general public to avoid the City of Stone Mountain, specifically the downtown area,” the statement said.

A large carving in a rock face depicts three Confederate leaders, General Robert E. Lee, Jefferson Davis, and Stonewall Jackson. The state of Georgia bought the mountain and surrounding land for a park in 1952. It is located about 15 miles east of Atlanta.

A number of groups planned to rally at the park, including the Three Percenters. In one Facebook event page, prospective attendees were told to “stand with us against the left-wing traitors and the racist Black Lives Matter movement who wish to erase our ancestors’ heritage and destroy our monuments!”

“Please do not forget your flags, state flags, Confederate flag, and the red, white, and blue,” another page urged people, describing the rally as one “for all patriots.”

Counter-demonstrators, including members of the far-left anarcho-communist group Antifa, planned to appear.

City and park officials rejected at least one request for a permit.

Bill Stephens, CEO of the Stone Mountain Memorial Association, told organizers in a letter that a local ordinance empowered him to deny a request for a permit because a rally would materially disrupt the park and/or present a clear and present danger to the public health and safety.

A 2016 event that involved members of the Three Percenters devolved into violence, he said.

The city of Stone Mountain said on Friday that it has not issued any permits for parade or assembly for the Saturday demonstrations.

In a statement the city added: “Please know that the city’s local law enforcement agency is managing the situation and has devised a plan for the protection of life and property. Every effort is being made to ensure that any demonstrations conducted within the city’s limits are performed peacefully and without incident.”

The park was closed last year ahead of planned left-wing demonstrations. City officials announced concerns about properly policing the event.

But it remained open on July 4 when the Not [Expletive] Around Coalition (NFAC), an all-black militia, marched in the park.

Grand Master Jay, leader of the group, called out the Three Percenters by name and other groups while using a slur against white people, adding: “We here, where the [expletive] you at? We’re in your house.”

The NFAC reportedly planned to descend again on the park on Saturday but Jay announced this week that they would not.

“We will not participate, nor do we find a reason to show up in Stone Mountain on the 15th. We are not demonstrators. We are not protesters. We don’t have to prove nothing to a bunch of people who didn’t show up when they issued a threat,” he said in a video released by the group.

“We’ve already made history, why would we walk back into a kill box?” he said.

But Jay emphasized that he supports the First Amendment right of the groups to gather and protest.

“We’re going to use the Second Amendment to protect the First Amendment,” he told a reporter. “We’re locked, cocked, and ready to rock.”