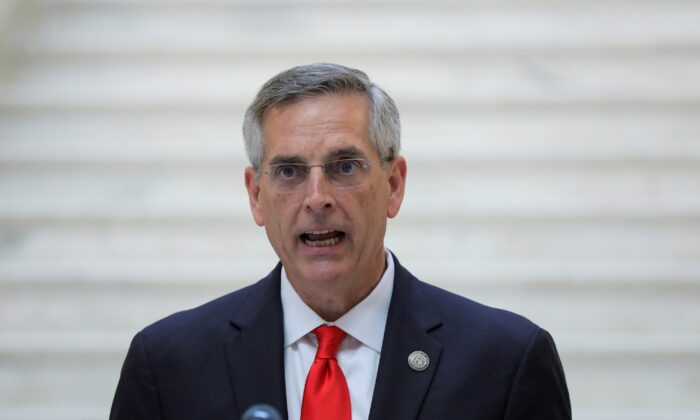 Georgia Secretary of State Brad Raffensperger gives an update on the state of the election and ballot count during a news conference at the State Capitol in Atlanta on Nov. 6, 2020. (Dustin Chambers/Reuters)
Election Integrity

“After 20 years of documented failure in Fulton County elections, Georgians are tired of waiting to see what the next embarrassing revelation will be,” Raffensperger, a Republican, said in a statement. “The Department of Justice needs to take a long look at what Fulton County is doing and how their leadership disenfranchises Fulton voters through incompetence and malfeasance. The voters of Georgia are sick of Fulton County’s failures.”

Two workers in the county allegedly shredded paper voter registration applications, all of which were received within the past two weeks, the county said in a separate statement on Oct. 11.

Upon learning of it, Fulton County Commission Chairman Robb Pitts reported the situation for investigation to the office of Fulton County District Attorney Fani Willis, a Democrat, according to the county.

“Elections are the most important function of our government,” Pitts said. “We have committed to transparency and integrity.”

A preliminary review indicated that the workers checked out batches of applications for processing. Instead of processing the forms, they shredded them.

Raffensperger said that approximately 300 applications were shredded. His office is probing the allegations.

But he wants the Department of Justice to probe the county, which has had a series of problems running elections in recent years, including counting ballots without oversight for more than an hour during the 2020 election.

A Raffensperger-appointed monitor, monitoring the election, witnessed processes he described as “badly managed, sloppy, and chaotic,” though he alleged didn’t see any fraud occur.

Georgia Republicans passed a bill earlier this year that would allow for a state takeover of the county if issues continued occurring. Georgia Gov. Brian Kemp, a Republican, signed it into law.

The Georgia Election Board in August voted to appoint a bipartisan panel to review the management of elections in the county, which could lead to a takeover by the state.