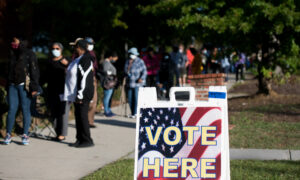 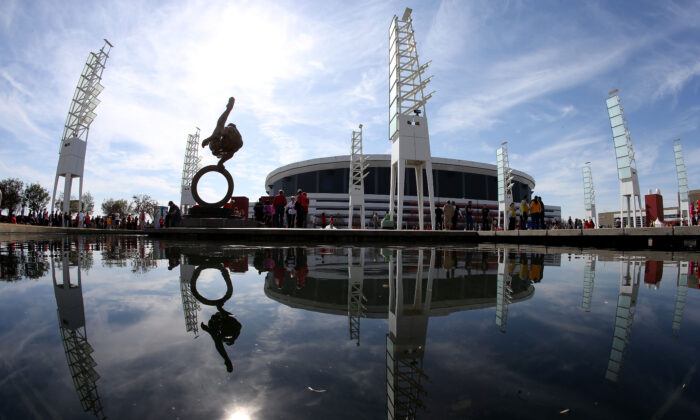 A general view of the exterior of the Georgia Dome before the 2013 NCAA Men's Final Four Semifinal between the Louisville Cardinals and the Wichita State Shockers in Atlanta, Ga., on April 6, 2013. (Streeter Lecka/Getty Images)
China-US News

As the presidential election results in Georgia face challenges from voter fraud claims, the state has also come under the spotlight for its business ties with China.

Most recently, Georgia Democrat Richard Ossoff, a media executive running for U.S. senator, received complaints (pdf) from the Georgia GOP for allegedly hiding his connections to a Hong Kong media firm linked to the Chinese government.

China has been Georgia’s largest trading partner for the past five years, making up 15 percent to one-fifth of the state’s total international trade volume between 2015 to 2019, according to Georgia’s commerce data (pdf).

Records from both the state’s official website and Chinese media reports reveal close ties that extend beyond trade and span across party affiliation. Aside from investments from nearly 50 Chinese businesses into the state, the two have developed sister city agreements and academic partnership programs that have come under growing scrutiny under the Trump administration.

Georgia Department of Economic Development (GDEcD), the state’s marketing agency, uses a website with a Chinese domain to promote business opportunities in China, Mexico, and Peru. By contrast, sites for other countries use a U.S. domain (georgia.org). The domain name, www.georgiabusiness.cn, is registered under a Chinese computer software developer called Beijing Demeng Sunny Technology Development, according to records compiled by U.S. web hosting company GoDaddy.

“For a webpage to be visible in the Chinese market, it must be hosted in China,” said Marie Hodge Gordon, director of communications at GDEcD when reached by The Epoch Times about the Chinese domain name. She did not explain whether the state has any business partnership with the Chinese firm.

Gordon said it was a “technical oversight” for the Peru and Mexico sites to be registered under the Chinese domain name. As of Dec. 9 morning, the department has changed the domain names for the two sites to the U.S. domain.

Secretary of State Mike Pompeo has recently warned U.S. policymakers from state to municipal level to be vigilant about Beijing’s “influence and espionage activities,” cautioning that the Chinese Communist Party (CCP) considers them “weak links” to exploit for advancing its interests.

In a speech given to the National Governors Association in February, Pompeo also highlighted a Chinese state-backed think tank report that analyzed attitudes of all 50 U.S. governors toward China, labeling each as “friendly,” “hardline,” or “ambiguous.”

“Whether you are viewed by the CCP as friendly or hardline, know that it’s working you, know that it’s working the team around you,” he told the governors, warning that the Chinese government has been “methodical” in assessing U.S. vulnerabilities to “gain advantage over us at the federal level, the state level, and the local level.”

While the Chinese think tank report rated Georgia governor Brian Kemp, a Republican, as supportive of President Donald Trump’s trade policies and thus being tough on China, it also noted that state governors’ overall stances “have not shown a tendency to be tough” and appear “not clearly influenced by the parties.”

Kemp, who previously served as the Secretary of State of Georgia, has maintained friendly ties with Chinese dignitaries since taking office in January 2019.

In April last year, Li Qiangmin, then Chinese consul-general in Houston, was invited to an event hosted by Kemp, where Li praised the governor for “proactively pushing for cooperation with China,” according to a press release by China’s Ministry of Foreign Affairs.

In July 2019, when Li was due to return to China after a five-year stint, Li met with Kemp again and invited him to visit China, “stressing the importance of building friendly China-U.S. relationship,” according to China Tribune, a pro-Beijing Chinese outlet based in Atlanta. After the meeting, Kemp gifted Li a book titled “Inspired Georgia,” with a handwritten note expressing appreciation for Li’s “great service and for your friendship to the state of Georgia,” according to the news report. The article has since been taken down.

The GDEcD’s Chinese website in 2019 also reposted a report by Chinese media about a speech by Li’s successor Cai Wei to mark the 70th anniversary of the CCP takeover of China. Cai’s speech, touting the regime’s leadership, was described as “deeply moving.” Stella Xu, GDEcD’s China initiative director, expressed “high hopes” for furthering trade relations with China, noting that the state had hosted over a dozen Chinese government and business groups in the past year alone. Kemp, in a meeting with Cai in late September, “warmly welcomed” Cai in his new role, saying he would like to see more investment and Chinese students coming into Georgia, according to the report.

Kemp did not respond to a request for comment.

When the pandemic was at its height in China, Beijing mobilized the Chinese diaspora to buy up shipments of medical supplies while halting exports of its manufactured medical goods.

Chinese groups in Georgia also took part in such efforts.

On Jan. 26, days after the Chinese city of Wuhan was placed under lockdown, dozens of Chinese associations began an initiative in Atlanta that ultimately raised $70,000 worth of funds and medical supplies to send to China, according to China Tribune.

On Feb. 3, Georgia’s state senate passed a resolution proclaiming the day as “China Day” to “commend the special friendship between Georgia and the People’s Republic of China” and to “recognize the Consul General Cai Wei of the Consulate General of China in Houston.” The State Department ordered the consulate’s closure this summer, saying it was a den of espionage.

“[T]he people of Georgia welcome opportunities to grow our already deep relationship at all levels including cultural, academic, and business,” the resolution stated.

Prior to the resolution’s passage, Cai was invited to give a speech at a state senate meeting, during which he heaped praise on the CCP’s virus control, claiming the regime had acted “with openness, transparency, and a highly responsible attitude,” and cast countries’ travel restrictions on China as acts of “spreading fear.”

The Beijing-funded CIs, along with Confucius Classrooms, have come under fire for perpetuating Chinese propaganda on college campuses. The State Department in August designated the center that promotes these institutes as a foreign mission.

In February 2015, Xu, the China initiative director, made a speech at the CI of Georgia State University to promote education and travel exchanges with China.

In September 2018, the same CI co-hosted a business forum themed around Beijing’s Belt and Road initiative (BRI, also known as One Belt, One Road), a controversial global infrastructure project that has been criticized for trapping developing countries under heavy debt. GDEcD and the Atlanta-based Coca Cola are among 19 organizations that sent representatives to the forum.

Georgia’s ties with China go back as early as June 2004, when the state opened its first China office in Beijing.

Then-governor Sonny Perdue, who is currently the U.S. Secretary of Agriculture, said at the time that they were looking forward “to a long and fruitful business relationship between our state and China’s business leaders.” A press release issued by the GDEcD at the time especially touted that major Georgia-based businesses have financial stakes in the Chinese market, such as UPS, GE Energy, and Delta Air Lines. Georgia officials were also “actively pursuing the establishment of a new consulate in Atlanta,” the release stated.

Chinese media picked up on the trend and described it as a new “China fever” from Georgia.

Perdue did not return an Epoch Times inquiry for comment.

Later in the year, the GDEcD boasted a “new record” in global trade performance, noting that China continues to be the state’s largest trading partner.

A previous version of this article misattributed information to the Georgia governor, when it was actually a different Brian Kemp. The Epoch Times regrets the error.