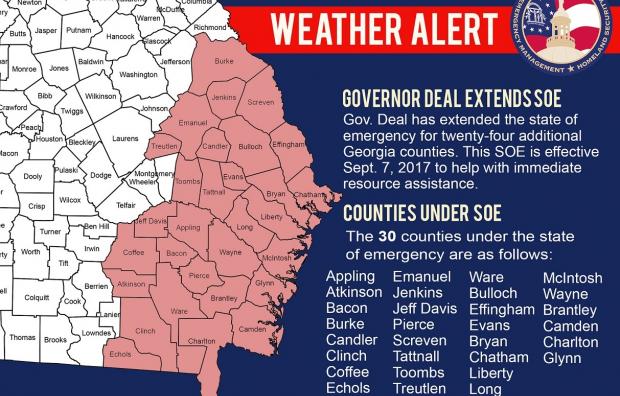 Gov. Nathan Deal declared a state of emergency for 30 counties in Georgia ahead of the potential impacts of Hurricane Irma. Meanwhile, some coastal areas will be under a mandatory evacuation order Saturday.

All residents east of Interstate 95 near Georgia’s coastline have been mandated to evacuate starting 8 a.m. Saturday, Sept. 9.

He said in a statement:

“The state is mobilizing all available resources to ensure public safety ahead of Hurricane Irma. I encourage all Georgians in our coastal areas that could be impacted by this storm to evacuate the area as soon as possible. Beginning Saturday, a mandatory evacuation order will take effect for Chatham County, all areas east of I-95 and some areas west of I-95 that could be impacted by this catastrophic hurricane and storm surge. GEMA/HS continues leading our preparedness efforts as we coordinate with federal, state and local officials to safely evacuate the coastal areas, provide public shelter and minimize the disruption of traffic. Finally, I ask all Georgians to join me in praying for the safety of our people and all those in Hurricane Irma’s path.”

As reported by Reuters, Irma has become a little less organized over the past few hours but the threat of a direct hurricane impact in Florida over the weekend and early next week was increasing, the National Hurricane Center (NHC) said.

The eye of Irma was moving west-northwest off the northern coast of the Dominican Republic on Thursday morning, the NHC said.

The eye of the hurricane passed north of Puerto Rico early Thursday, battering the U.S. territory with high winds and heavy rains and leaving nearly 70 percent of the population without electricity, Gov. Ricardo Rossello said.

With winds of around 180 mph, the storm lashed several small islands in the northeast Caribbean, including Barbuda, St. Martin, and the British Virgin Islands, tearing down trees, flattening homes, and causing widespread damage.