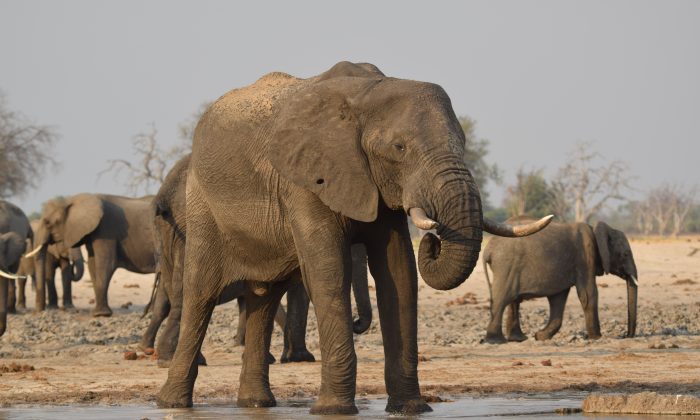 In November, before the rains, when water is at its sparsest, elephants enjoy soaking their feet to cool off the fiery temperatures.(Giannella M. Garrett)
Africa

A Georgia businessman, who was photographed holding a gun next to two dead elephants in Zimbabwe, said the pachyderms charged at him, forcing him to shoot them.

Mike Jines, a partner with TopGen Energy in Georgia, offered his side of the story after people slammed him on social media for killing the elephants. He reportedly killed the elephants in October.

“The two elephant [sic] that are shown in the photos were shot in self-defense, in an unprovoked charge and both elephants were fully mature cows, not juveniles,” he told local news outlet CBS46.

He claims he killed them in 'self-defense' 😡😡😡😡

“The hunt started with a bang . . . literally. Less than thirty minutes into the first morning of the first day we experienced a double elephant cow charge. This was obviously a first for me but it turns out it was a first for [fellow hunter] Buzz as well,” he also said.

“We saw a group of cows from the road and decided to follow them to see if a tuskless was in the group. We caught them quickly and identified a tuskless. We positioned ourselves to get a good look at the tuskless and concluded that since it was just Day 1 we would pass.”

Jines said one of the elephants charged at him, and he and the other hunter “fired two shots” each, killing it.

Another elephant charged at them from behind, and both each fired one shot, killing the other.

“She crashed to the ground with her hind legs out behind her, indicating the speed and determination of her charge. The two cows were less than forty feet apart with Buzz and I in the middle,” Jines elaborated.

The Georgia man said he wanted to share his side of the story amid what he describes as rampant mischaracterizations of the event on social media websites.

In search of tusk-less elephants to slaughter, this ‘man’ killed these two teens from a herd of females, claiming they charged him. Then he posed with, and between their dead bodies. These babies were mourned by the herd. Greed & Ego! 😒@Protect_Wldlife @rickygervais @PeterEgan6 pic.twitter.com/kzWr4R33p1

Jines, who said he isn’t sure how the photos got online, added that most of the responses have been threatening and insulting.

“You have no heart, no soul. This is sickening and pathetic. It’s just so sad to see this,” one irate Twitter user wrote about the photos, according to the Daily Mail.

Another tweeted: “There’s evil, and then there’s you #mikejines one can only hope the universe and all that is just punish (sic) you for killing those elephants. Boycott #TopGenEnergy.”

“While I can appreciate that hunting can be polarizing and that views on hunting can vary materially, I am sure that you can appreciate what it is like to deal with the vitriol particularly when the underlying information in this case is inaccurate,” Jines stated.

The U.S. Fish and Wildlife Service has said that hunting big animals like elephants and lions actually brings in money that countries can use for anti-poaching programs.

“The Service will continue to monitor the status of the elephant population, the management program for elephants in the country to ensure that the program is promoting the conservation of the species, and whether the participation of U.S. hunters in the program provides a clear benefit to the species,” U.S. Fish and Wildlife said in 2017 (pdf).

“These positive findings for Zimbabwe and Zambia demonstrate that the Fish and Wildlife Service recognizes that hunting is beneficial to wildlife and that these range countries know how to manage their elephant populations,” said the organization’s president, Paul Babaz.“We appreciate the efforts of the Service and the U.S. Department of the Interior to remove barriers to sustainable use conservation for African wildlife.”