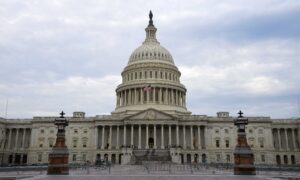 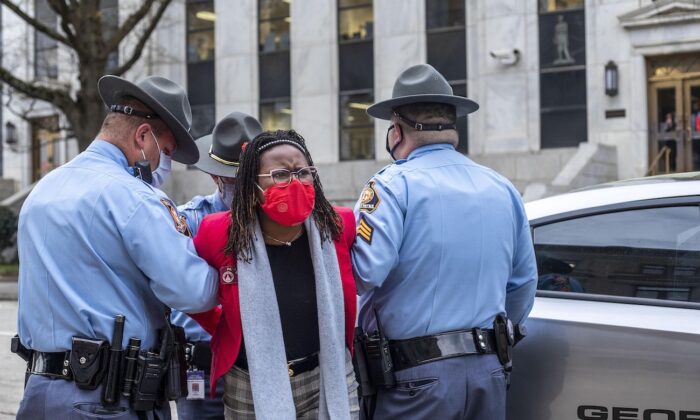 A Georgia lawmaker, state Rep. Park Cannon (D-Atlanta), was arrested on Thursday and charged with felony obstruction of law enforcement and with “disrupting General Assembly sessions or other meetings of members.”

The incident occurred while Gov. Brian Kemp was holding a press conference after he signed into law a sweeping state election reform bill. As Kemp delivered his remarks he was interrupted by a commotion before a livestream of the event cut out.

Video widely circulated online captured by a bystander shows Cannon trying to knock on the door of Kemp’s office multiple times before she is handcuffed and forcibly removed from the area by Georgia State Patrol officers.

Cannon then “moved and went to the Governor’s Ceremonial Office door,” the spokesperson said in the statement, noting that the door was marked off with stanchions and a ‘Governor’s Staff Only’ sign. Despite that, the Democrat state representative “went inside the stanchions and began knocking on the door.”

Officers at the door then told Cannon to stop knocking on the door, telling her that Kemp was holding a press conference inside. But she continued to knock on the door, after which she was advised that her actions were disturbing the events inside Kemp’s room, and if she did not stop, she would be arrested.

Cannon retreated for a little bit before walking toward the door and knocking on it again, after which an officer at the door told her to stop for the third time, and said she would be arrested if she continued.

The statement continued, saying “Rep. Cannon refused to stop knocking on the door,” after which she was arrested and sent to the Fulton County Jail.

An affidavit for arrest citing Officer E. Dorval said that Cannon “did knowingly and willfully hinder [officers of the Georgia Capitol Police Department] … by Use of Threats Or Violence to the person of said officer by stomping on LT Langford foot three times during the apprehension and as she was being escorted out of the property. The accused continued on kicking LT Langford with her heels.”

The other affidavit for arrest, also citing Dorval, said that Cannon “knowingly and intentionally” committed the offense of Preventing Or Disrupting General Assembly Sessions or Other Meetings of Members by “knocking the governor’s door during session of signing a bill.”

The affidavits for arrest were shared by a reporter from the Atlanta Journal-Constitution.

Both charges are felony charges. The obstruction of law enforcement charge is punishable by 1 to 5 years in prison.

Cannon’s attorney, Gerald Griggs, announced on Twitter in the late hours of Thursday that she was released from custody, and he intends to “vigorously defend” Cannon against the charges. “All requests for comment should be forwarded to her attorney,” he added.

Griggs is associated with the Atlanta chapter of the NAACP (National Association for the Advancement of Colored People). He told reporters outside the jail upon her release late Thursday that Cannon sustained bruises during her arrest. He called the arrest “an overreach of law enforcement.”

Sen. Raphael Warnock (D-Ga.), who was with Griggs outside the jail, told reporters that Cannon “did not deserve this.”

“What we have witnessed today is a very desperate attempt to lockout and squeeze the people out of their own democracy,” he said of Cannon’s arrest, later adding, “I want to know what makes her actions so dangerous.”

Warnock noted that Cannon is a parishioner at the Ebenezer Baptist Church in Atlanta, where Warnock was a senior pastor.

The new state election law Kemp signed, S.B. 202, has multiple provisions designed to ensure secure, fair, and accessible elections, according to Republicans and Kemp. However, opponents of the new law, which include Democrats and some advocacy groups, accuse the measure as one that would disproportionately disenfranchise voters of color.

Among the numerous measures in the new law are voter ID requirements for absentee mail-in ballots, measures to ensure dropbox security, a mechanism for the State Election Board to address local counties’ election problems, and mandatory early voting dates.

Melanie Sun and The Associated Press contributed to this report.