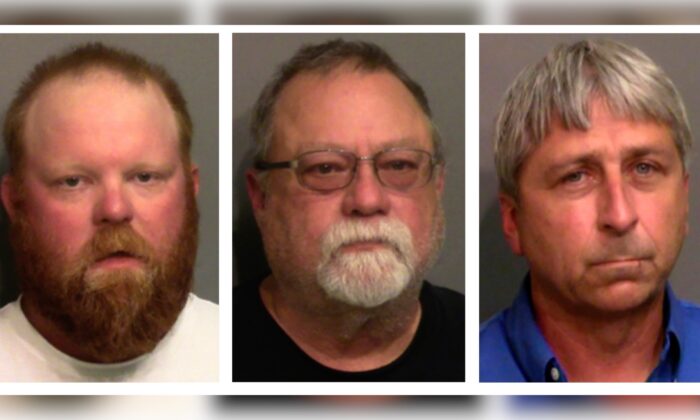 The second day of jury deliberations took place Wednesday in the Ahmaud Arbery homicide case as protesters and Black Lives Matter activists began to congregate outside the Georgia courthouse.

The jury asked to see evidence that was presented during the trial, namely the video of the shooting and the 911 call made by Gregory McMichael on Feb. 23, 2020, according to the judge.

“We, the jury, request to see the following videos three times each: One, the original video, the short version. Two, the enhanced high contrast version. We would also like to listen to the 911 call on to 2/23 made by Greg McMichael,” said the jury request, read by Judge Timothy Walmsley on Wednesday morning.

In the incident, father and son Greg and Travis McMichael grabbed guns and pursued Arbery in a pickup truck after spotting him running through their subdivision on Feb. 23, 2020, prosecutors said. A neighbor, William “Roddie” Bryan, joined the chase and recorded the video of Travis McMichael opening fire as Arbery threw punches and grabbed for McMichael’s shotgun.

The three were all charged with murder, aggravated assault, and false imprisonment for the fatal shooting of Arbery.

While their defense attorney argued that they acted in self-defense, prosecutors said that Georgia law stipulates that they cannot claim self-defense and painted the defendants as the aggressor in this case.

“You can’t claim self-defense if you are the unjustified aggressor,” prosecutor Linda Dunikoski told jurors in her final argument earlier this week. “Who started this? It wasn’t Ahmaud Arbery.”

Arbery’s pursuers had “no badge, no uniform, no authority” and were “just some strange guys in a white pickup truck,” she said of the encounter.

There also was no evidence, Dunikoski added, of Arbery having committed crimes in the defendants’ neighborhood. Arbery, who had a prior criminal record that included theft, was not seen stealing anything when he was recorded on security cameras inside a home that was under construction.

“You’ve got lumber, you’ve got all this stuff,” Dunikoski said. “Mr. Arbery never shows up with a bag. He doesn’t pull up with a U-haul. … All he does is wander around for a few minutes and then leave.”

Defense attorneys objected to Dunikoski’s explanation, saying the McMichaels had reason to suspect that Arbery stole items from the home. The owner had found some items missing before cameras were installed.

“This is a misstatement of the law and the argument is improper,” Franklin Hogue, an attorney for Greg McMichael, said on Monday.

An attorney representing Travis McMichael said the man fired his shotgun in self-defense after Arbery charged at him and tried to grab his weapon.

Outside the courtroom in Brunswick, Georgia, on Wednesday, Black Lives Matter supporters gathered. Some chanted “shut it down” if there isn’t “justice” for Arbery.