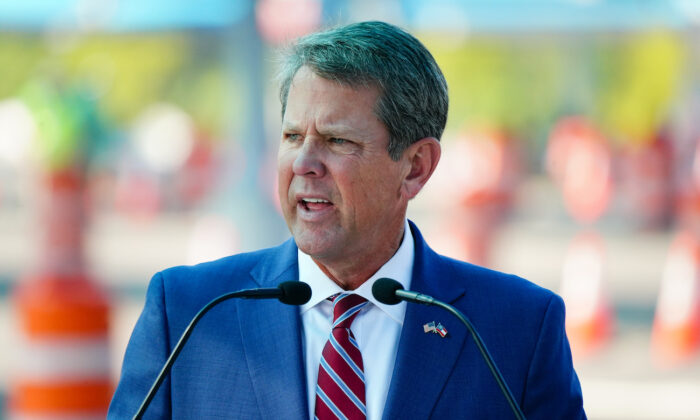 Georgia’s governor has signed a bill that bans state and county agencies from requiring proof of COVID-19 vaccination.

After signing the bill on May 3, Gov. Brian Kemp said that “we will always stand up for the rights of our people against government overreach.”

The legislation, Senate Bill 345, prohibits state and local governments from mandating “vaccine passports,” or requiring proof that a person has gotten the COVID vaccine.

The bill “simply bans the ability of the state of Georgia to mandate the COVID-19 vaccination—that’s it,” state Sen. Jeff Mullis, a Republican and the bill’s sponsor, told a state Senate panel earlier this year.

Previously, Georgia residents could have been excluded from governmental functions such as speaking about proposed legislation at the state Capitol or attending school, state Rep. Bonnie Rich, a Republican who sponsored the House version of the bill, said on the House floor.

The legislation was altered after being introduced, including making clear that it doesn’t apply in cases when an agency would violate federal law by following it.

One such example is hospital systems, which are largely governed by the U.S. Centers for Medicare and Medicaid Services. That agency has a COVID-19 vaccine requirement in place for employees at systems that receive Medicare or Medicaid funding.

Another change to attempt to appease critics is a sunset provision.

Mullis said he plans to revisit the matter by then, saying it’s possible the prohibition could be extended, perhaps permanently.

Sponsors said the bill still allows school systems to require COVID-19 vaccination, although the final version says the word agency means, among other entities, every school district in the state.

State Sen. Michelle Au, a Democrat and a doctor, was among those voting no.

“This bill undermines public trust in the COVID vaccine,” she claimed on the Senate floor, describing the vaccines as safe and effective.

Kemp, who is running for reelection, in May 2021 issued an executive order that barred state agencies from requiring vaccine passports.

The new bill goes further by including agencies on the county level.

Kemp, Mullis, and Rich all said they are vaccinated, but feel people shouldn’t be mandated to get the jab.