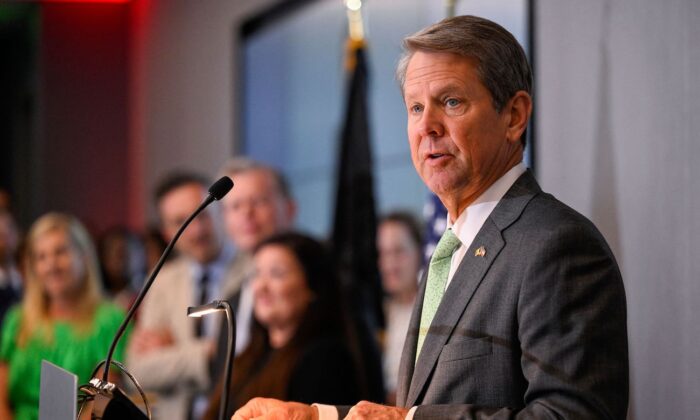 Georgia Gov. Brian Kemp filed a motion on Aug. 17 to quash a grand jury subpoena requiring him to testify as part of an investigation into the actions of former President Donald Trump after official results in the 2020 presidential election showed that then-Democratic presidential candidate Joe Biden had won.

Kemp received a subpoena on Aug. 4, after a voluntary interview scheduled for late July was canceled.

“The Governor agreed to a voluntary interview to be held on July 25, 2022, but when counsel for the Governor asked reasonable questions of the [District Attorney’s] Office regarding the scope of that interview, the DA’s Office unilaterally canceled the interview and issued the Subpoena,” attorneys for Kemp said in the motion (pdf) filed on Aug. 17 in Fulton County Superior Court. “Why the DA’s Office acted so abruptly is unclear.”

According to an exhibit in the motion, Kemp has been asked to testify before the grand jury at 9 a.m. on Aug. 18.

Kemp’s lawyers said the subpoena should be quashed because it’s “barred by sovereign immunity.” The subpoena also “improperly seeks to invade established common law executive and attorney-client privileges,” and is “being pursued at this time for improper political purposes,” they wrote.

“Georgia courts have no authority to compel a sitting Governor to provide testimony about matters involving his official duties due to sovereign immunity,” the motion reads. “Even if that were not the centuries-old law of this State, the Subpoena at issue is improper, and due to be quashed, because its timing is neither driven by a genuine investigative need for information nor compliant with the established ethical rules governing prosecutors and election cycle investigations.”

Chief Judge Christopher Brasher of the Fulton County Superior Court authorized a special purpose grand jury in January, as requested by Fulton County District Attorney Fani Willis, “for the purpose of investigating the facts and circumstances relating directly or indirectly to possible attempts to disrupt the lawful administration of the 2020 elections in the State of Georgia.” The grand jury was authorized to begin on May 2.

In April 2021, the DA’s Office had “informed counsel that the DA’s Office was interested in meeting with Governor Kemp to discuss a telephone call between the Governor and former President Donald Trump,” Kemp’s legal team noted.

The team provided a timeline outlining the correspondence that took place between Kemp’s counsel, Brian McEvoy, and a number of aides to Willis.

“While the special purpose grand jury was only recently authorized, the DA’s Office has been investigating the events surrounding the 2020 Presidential election for at least a year and a half,” Kemp’s lawyers said in the motion. “During that time, and well before the Subpoena was issued, Governor Kemp consistently attempted to engage with DA’s Office and to voluntarily provide it with relevant and appropriate information regarding its investigation. … The DA’s Office ignored, denied, or otherwise frustrated these attempts time and time again.”

Kemp’s lawyers alleged that the Fulton County DA’s Office “through delay and artificial deadlines … has engineered the Governor’s interaction with the investigation to reach a crescendo in the middle of an election cycle.”

“This timing cannot be ignored given the Governor’s repeated efforts to engage with the DA’s Office prior to 2022 and even before announcing his reelection campaign,” they said in the Aug. 17 motion.

A spokesperson for the Fulton County DA’s Office didn’t respond to an email from The Epoch Times requesting comment by press time. The office declined to comment when reached by CNN.

Kemp is running for reelection against Democratic challenger Stacey Abrams, who Kemp beat in 2018. In May’s Republican primaries, Kemp, who was endorsed by former Vice President Mike Pence, easily defeated David Perdue, a former Georgia U.S. senator who was endorsed by Trump.

Trump had previously criticized Kemp for having refused to overturn Georgia’s contested election results in 2020, which were certified in favor of now-President Joe Biden.