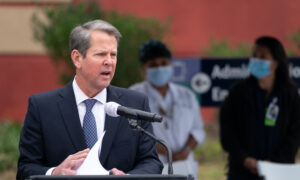 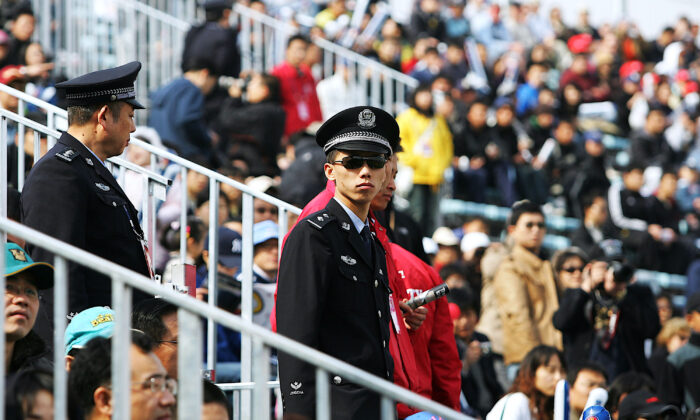 Chinese policemen at the game between the Los Angeles Dodgers and the San Diego Padres at Beijing's Wukesong Stadium in Beijing, on March 16, 2008. (Guang Niu/Getty Images)
Republicans

On April 13, the Georgia GOP Press Secretary posted a newsletter calling out Major League Baseball: “MLB Gets in Business with China while Boycotting Georgia,” with the headline “MLB: CCP ok, GA bad.”

In the newsletter, it calls out the MLB for pulling its All-Star game from Georgia to boycott the newly-passed election integrity law soon after signing a deal with Tencent, a communist-linked Chinese telecommunications firm.

The new deal allows for broadcast of MLB spring training, regular season, and the All-Star game in communist China through 2023.

To the CCP, Morey represented a foreign power encouraging these demonstrations. Back then, the Chinese consulate in Houston denounced Morey’s tweet by saying it was “deeply shocked” by his “erroneous comments.” The Chinese Basketball Association ceased all cooperation with the Rockets, and CCTV, the state-run television station, has suspended broadcasts of games.

China’s Education Bureau also canceled a few scheduled NBA Cares events in some of China’s major cities, which were set to dedicate a Learn and Play Center at local schools, even just hours before scheduled start times.

Response to the Boycott

Rob Manfred, the league commissioner, said in an announcement on April 2, “Major League Baseball fundamentally supports voting rights for all Americans and opposes restrictions to the ballot box.”

Based on estimates, the MLB’s decision to move out of Georgia will cause $90-100 million in losses for local businesses.

Soon after the Major League Baseball announced its decision, Sen. Marco Rubio (R-Fla.) wrote on Twitter: “Dear GOP: @MLB caves to pressure & moves draft & #AllStarGame out of Georgia on the same week they announce a deal with a company backed by the genocidal Communist Party of #China”

Aubrey Huff, a former MLB player with two World Series wins with the San Francisco Giants, said players and other team employees were “blindsided” and felt bad about the MLB’s decision.

“I feel bad for the vast majority of @MLB players that love America in regards to this blindsided decision by Rob Manfred. But I won’t feel bad for you if you don’t speak up as a group soon on this decision to leave Georgia….”