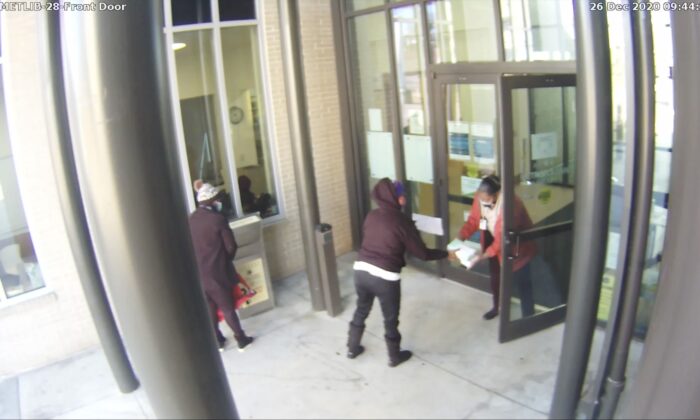 A still frame from surveillance footage of a ballot drop box at a library in Atlanta. True the Vote has officially asked Georgia officials to investigate the circumstances. Video seems to show ballots being passed between an election worker and an unknown library staffer. (Courtesy of True the Vote)
Election Integrity

‘2000 Mules’ Allegations Not Part of Claims Dismissed by Georgia Elections Board, Despite Media Reports

The Georgia State Elections Board hasn’t debunked any assertions made in the recently released “2000 Mules” documentary, even as dozens of media outlets have recently claimed otherwise.

Elections officials appeared to suggest during a May 17 meeting that they had disproven allegations from the documentary, which alleges widespread voter fraud in the 2020 general election.

However, the board has yet to review any claims made by True the Vote, the organization featured in “2000 Mules.”

As described in the documentary, which was released on May 7, Houston-based True the Vote spent a year and a half analyzing cellphone data and drop box surveillance videos to show patterns of what they call illegal ballot trafficking during the 2020 elections. The nonprofit focused its work in five jurisdictions in five swing states won by Democrat Joe Biden—Georgia, Arizona, Michigan, Pennsylvania, and Wisconsin.

None of the complaints of voter fraud associated with the documentary were taken up at the May 17 meeting.

In an apparent swipe at the film’s creators, board member Sara Tindall Ghazal said that “real harm has been caused by these unsupported allegations asserted by individuals seeking to profit off of them.”

But during the meeting, the only matter concerning True the Vote’s complaint was an update on when an investigation could begin.

Ryan Germany, general counsel to the Georgia Secretary of State’s Office, said an effort to look into a broad complaint filed by True the Vote in November is on hold until the organization complies with subpoenas issued on April 21.

The holdup centers on True the Vote’s concern about the safety of its informant, according to the organization’s founder, Catherine Engelbrecht. Germany acknowledged that those are “genuine concerns.”

The informant, known as John Doe in the True the Vote complaint to the state, provided details about election fraud that sparked the organization’s investigation, Engelbrecht told The Epoch Times. Revealing his identity could put him in grave danger, she said.

Engelbrecht says she wants the information her organization uncovered to be thoroughly investigated; she offered to turn over all the data used in the analysis once the informant’s safety could be guaranteed, she said.

Engelbrecht appears in the documentary. The film alleges that illegal ballot trafficking took place on a scale significant enough to have flipped the 2020 elections.

About a year before the movie’s release, Engelbrecht brought her findings to officials in Georgia, where the first part of the analysis was complete, but officials with the Georgia Bureau of Investigation dismissed her concerns.

She brought her evidence to state Republican Party officials, and then to the state’s GOP governor, Brian Kemp. She said she was shocked that none of them took action.

Kemp is facing the first hurdle toward reelection in the May 24 GOP gubernatorial primary. His chief rival is former Sen. David Perdue, who was previously defeated in a runoff during the election cycle questioned by True the Vote’s analysis.

Perdue was endorsed by Trump, who has always contended the election was stolen by coordinated fraud. Trump has relentlessly criticized Kemp for not taking action to investigate. Kemp is endorsed by former Vice President Mike Pence.

On Nov. 30, Engelbrecht officially filed a complaint based on her findings with Georgia Secretary of State Brad Raffensperger, who’s also seeking reelection. He was the first state official to open an investigation of True the Vote’s findings.

In an official complaint, True the Vote describes an informant who claimed he was “one of many individuals paid to collect and deliver absentee ballots during the early voting periods of the November 2020 General Election and the January 2021 Runoff Election.”

“John Doe’s assignment included collecting ballots, both from voters in targeted neighborhoods and from NGOs [nongovernmental organizations] that had their own ballot collection processes, delivering those ballots to other NGOs, picking up designated ballot bundles from the same group of NGOs, and depositing ballots into drop boxes spanning six counties in the metro Atlanta area,” the complaint states.

“Each drop box delivery would typically include between 5 to 20 ballots. John Doe described a payment validation process that involved taking cell phone pictures of the dropbox where ballots were deposited. Participants were compensated, typically at a rate of $10 per ballot. John Doe stated he had been paid directly by one of these NGOs.”

True the Vote requested and reviewed 4 million minutes of drop box surveillance video, which is required under law for the monitoring of drop boxes. To some of her requests, officials have responded that the video doesn’t exist and they can’t explain why, documents provided to The Epoch Times confirm.

The purchased data allowed True the Vote researchers to establish “what devices were at a particular location at a particular time,” without disclosing “any private information about a person’s identity.”

By mapping 10 trillion cellphone pings, True the Vote found that “in six counties in and around Atlanta, 552,987 cellphones came within a narrowly defined distance of ballot drop boxes” during early voting, the complaint states. “However, 242 unique devices made repeat trips to drop boxes averaging 23 trips each,” and “also went repeatedly, averaging eight trips each, to specific NGOs.”

True the Vote dubbed the ballot carriers “mules.” The organization repeated the work in key areas of the five swing states, identifying more than 2,000 so-called mules.

In Georgia, “these 242 individual devices went to drop boxes a total of 5,668 times with approximately 40% of the visits occurring between the unusual hours of 12:00 a.m. and 5:00 a.m,” the True the Vote complaint states.

In December 2020, “after Arizona authorities announced that fingerprints on absentee ballot envelopes helped uncover an illegal ballot harvesting scheme in that state,” some “individuals depositing ballots into drop boxes in Georgia are seen wearing blue surgical gloves. They often put them on just before picking up their stack of ballots and remove them as they exit the dropbox area,” the complaint states.

During the May 17 elections board meeting, although they didn’t hear or consider any information provided in the True the Vote complaint, board members did vote to dismiss three complaints brought by a Georgia resident. A state investigator described his findings to the board one by one.

All three cases involved surveillance video of activity at ballot drop boxes, such as that requested by True the Vote and shown in “2000 Mules.” All three videos showed drivers getting out of cars and depositing multiple ballots in drop boxes, the investigator told board members.

He was able to track down the drivers of the cars using their license tags. In all three cases, the drivers’ stories checked out—they were depositing ballots belonging to family members, the investigator said.

State records confirmed that their family members’ ballots had been left in the drop boxes on the day the ballot carrier appeared on the surveillance video, the investigator told board members.

During a discussion of a case involving a white Ford SUV, board member Edward Lindsey asked the investigator, “Do you know whether or not this individual was one of those people whose car and car tag and picture was published publicly?”

“I have not seen the movie True the Vote [sic],” the investigator replied. “But I did see a True the Vote representative on ‘Tucker Carlson [Tonight]’ show, and, in the background, they had that video clip playing of that subject and the white SUV.”

While the clip was indeed shown on the Fox News program, there was no allegation made that the driver was doing anything illegal. The video was played, but wasn’t discussed during Engelbrecht’s interview with Carlson on May 5.

The video, one of several surveillance clips shown in a montage during her interview, was used because it was clear enough to illustrate a ballot box being visited by people dropping off multiple ballots, Engelbrecht said.

That particular drop box was also significant because it was visited by 271 people over one 25-hour period monitored by True the Vote, Engelbrecht said. But a video of the ballot box being emptied by elections workers appeared to hold far more than 271 ballots.

When True the Vote requested and checked the log of that ballot box, it found that 1,962 ballots had been deposited by those 271 people.

It’s legal for someone to deliver the ballots of family members living in the same home, but only if they add their name to the outside of the sealed ballot envelope.

When Engelbrecht asked the state for information about how many of those 1,962 ballots had the required signature, the answer was “none,” she said.

At the May 17 meeting, after a second complaint brought by a Georgia resident seemed to show no indication of misdeeds, Lindsey asked the investigator if the video clip referenced in the complaint had appeared “in any kind of documentary or anything like that? Do you know, in this situation, that happened again?”

“I have not seen any my personal self,” the investigator testified. “I have not watched that movie yet.”

Lindsey then said, “If you see something that you find questionable, turn it over to the authorities, but don’t simply go out and start questioning the integrity of individuals alleging crimes without any further evidence that could subject you to some kind of liability from that individual, who rightly might take exception to having their good name questioned.”

A third case alleging potential ballot-harvesting that was brought by a Georgia resident also was dismissed after the same investigator said the ballot carrier’s story checked out.

After the meeting, dozens of media outlets—including the Atlanta Journal-Constitution and the Associated Press—published news accounts saying the board had debunked claims made in “2000 Mules.”

It had not. Whether intentional or by mistake, the assertion infuriates Engelbrecht. But she remains optimistic.

She says she hopes the film will sound an alarm that wakes Americans to the fact that they must start paying attention to elections in this country, and that their involvement in elections can help restore integrity to voting. She says she hopes Americans will call for more state officials and law enforcement agencies to take True the Vote’s complaints seriously.

Currently, the organization is working with law enforcement agencies in Arizona, Michigan, and Wisconsin, Engelbrecht said.

She’s anxious to provide details to Georgia investigators that, she says, may show that outcomes of the 2020 elections were changed by fraud. But she has to feel confident the whistleblower will be protected.

“We’ll provide everything,” she told The Epoch Times. But only when she’s confident turning it over won’t “get people hurt … or worse.”

Natasha Holt contributed to this report