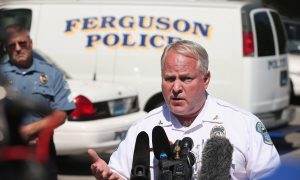 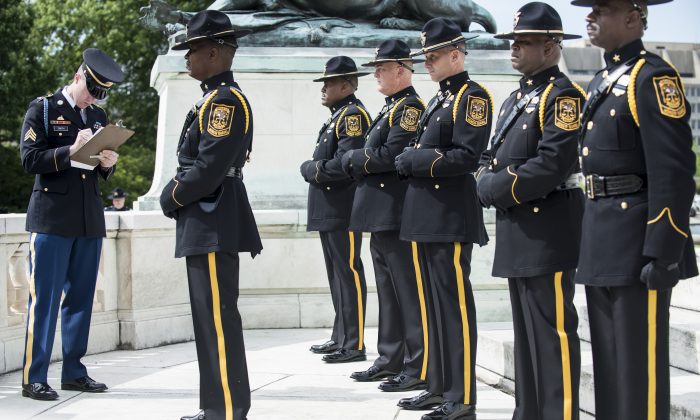 US Army Sargent Simon Smith (L) judges members of the Dekalb County Police during the 11th annual honor guard competition on Capitol Hill in Washington on May 14, 2013. The competition was held as part of the 2013 Police Week. AFP PHOTO/Brendan SMIALOWSKI (Photo credit should read BRENDAN SMIALOWSKI/AFP/Getty Images)
US

ATLANTA—A traffic ticket turned into a federal case in Georgia. Though the U.S. Supreme Court ruled more than 30 years ago that it is unconstitutional to put people in jail when they cannot afford to pay court fines or fees, it still happens across the country.

On March 19, the American Civil Liberties Union (ACLU) and DeKalb County, Georgia, announced that they had reached a settlement over a man who said DeKalb County in Atlanta locked him up over court fines and probation fees that grew from a traffic ticket when he was 19. He owed $838 in traffic fines and fees, but he had tried his best to make payments, according to the ACLU.

Kevin Thompson spent five days in jail. He should not have spent any. DeKalb County and other defendants did not admit liability, but they are paying something both to Thompson and his attorneys. He gets $60,000 and his lawyers get $10,000.

Even though I am a DeKalb County taxpayer, and want my county to live long and prosper, part of me wishes the thing had blown up into a big old trial. This is why: It’s common in Georgia, as it is in Ferguson, Missouri, according to a recent Department of Justice report, that court fines and fees wind up as a major source of revenue for local governments, and that those fines and fees hit low-income people hardest.

This is not fair or right. How many people know it’s unconstitutional to jail people who cannot afford court fines? How big of an open door to abuse is using fines and fees to support your local government? If Thompson v. DeKalb County had gone to trial, more judges and probation departments and courts might find it prudent to restructure how they do things, as they are now mandated to do in Ferguson.

Being poor is not a crime, and these measures will help ensure that people’s freedom will not rest on their ability to pay traffic fines and fees they cannot afford.
— Nusrat Choudhury

Here’s another thing. Georgia is the Wal-Mart of probation. It’s all about volume. The Federal Bureau of Justice Statistics reported that 500,000 Georgians were on probation in 2013, the most recent year available. That is far more than in any other of the 50 states. Georgia uses contractors to supervise people on probation, and the private contracting companies charge the probationers fees for the privilege of being supervised. Those fees beef up the amount owed, and there is no accountability over how big they are or how they are applied. It’s another open door to abuse.

To the county’s credit, it was already trying to improve its probation practices. Chief Judge Nelly Withers of the DeKalb County Recorder’s Court said in a statement: “Before the filing of this lawsuit, the DeKalb County Recorder’s Court began to develop a plan for a different private probation model. A new provider was selected under a contract which cut supervisory fees dramatically, allowed for little or no reporting, telephone reporting, and the conversion of fines to civil obligations at the request of the defendant. This civil payment model, which has been in place at the court for years on county ordinance violations, should not result in revocations with the possibility of incarceration.”

So in plain English, they will use a contractor that does not gouge people. They will let people volunteer to do community service instead of pay money. Then people will not get thrown in jail over traffic tickets or fines. This is good.

The changes that come from the settlement are good too. According to the ACLU, they include:

Adoption of a “bench card” that provides judges instructions to avoid sending people to jail because they owe court fines and are unable to pay. It will list the legal alternatives to jail, such as community service.

Training and guidance to Recorder’s Court personnel about the right to a lawyer for a person before his probation is revoked, and the right to a hearing to decide if a person is indigent and unable to pay fines or fees.

New court forms that tell people they can ask for any public defender fees they cannot afford to be waived, and that they have the right to counsel if the court threatens to revoke probation and send them to jail.

“Being poor is not a crime, and these measures will help ensure that people’s freedom will not rest on their ability to pay traffic fines and fees they cannot afford,” said ACLU attorney Nusrat Choudhury in a statement. “These measures also serve as a model for courts across Georgia and in other states to help ensure that our poorest and richest citizens are treated equally and fairly.”

I hope these measures spread around the country. It’s clear that more places than my hometown need to improve.