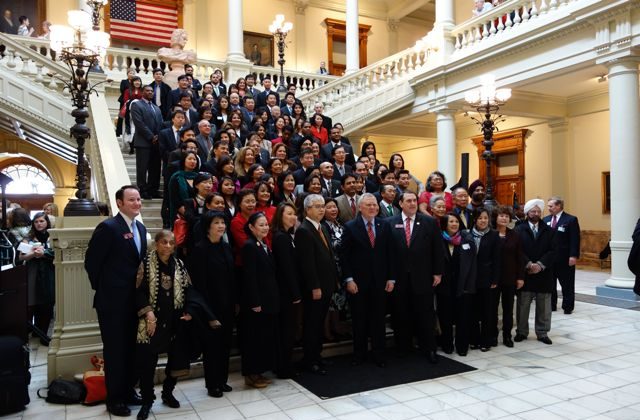 ATLANTA—Nathan Deal (R-Ga.) posed for pictures with people of Asian descent at the state capitol on Feb. 28, marking the first Asian American and Pacific Islander Legislative Day. The group filled a staircase inside the capitol rotunda.

Organizers hope to have started an annual tradition, according to lawyer Bonnie Youn.

Rep. B. J. Pak (R-Ga.) said, “I was very proud to walk around and see so many Asians in the capitol. I think it really is historic.”

The day was meant to encourage Asian Americans to take part in civic affairs and public life. Pak told the group to “no longer fall into the trap of identifying yourself as one group. You’re Georgians and Americans first.”

“This bill will do a lot for all children,” said Julia Nabors of the JUSTGeorgia justice coalition. “We have to make sure that those who come before juvenile justice have a chance to change.”

Rep. Wendell Willard (R-Ga.), chair of the Georgia House Judiciary Committee, sponsored the bill, which will put resources into educating and rehabilitating nonviolent juvenile offenders instead of detaining them. To do that is both cost-effective and humane, according to Willard. Locking children up costs much more each year than sending a person to a four-year college.

“You can put a child through the finest college in the country for less than that,” he said. Locking kids up is wasteful of human lives and of taxpayer money, Willard said at the sold-out AALAC legislative breakfast.

The legislative day included visits to legislators as well as practical training about how to advocate.

“The best way is eye to eye, person to person, what you did today,” according to professional lobbyist Mike Vaquer. Be concise, he said, adding, “Have your argument synthesized into about 15 seconds.”

He recommended only giving your legislator two copies of proposed legislation because only two are official and receive signatures. “They will lose more,” he said.

Elected officials do not have time to read emails; phone calls are a step up from emails, in his opinion. Vaquer knows one legislator who will take action once he gets six phone calls because he estimates that if six people have called, then it’s likely that 2,000 feel the same way about the issue.

“If someone opposes your issue, don’t argue, be polite, thank him or her for the time, and look for someone who does agree,” said Vaquer.

Be persistent, he said. “You as a constituent really have to assume the responsibility to see it through.” He also said he has a dear friend in the House who has passed meaningful legislation, but “unless you hold his hand through the process, it does not get done.”

Civil rights movement veteran and Rep. Tyrone Brooks (D- Ga.) said, “You can count on me, come to me with your issues. I just came to fellowship with you and get a bite to eat.”