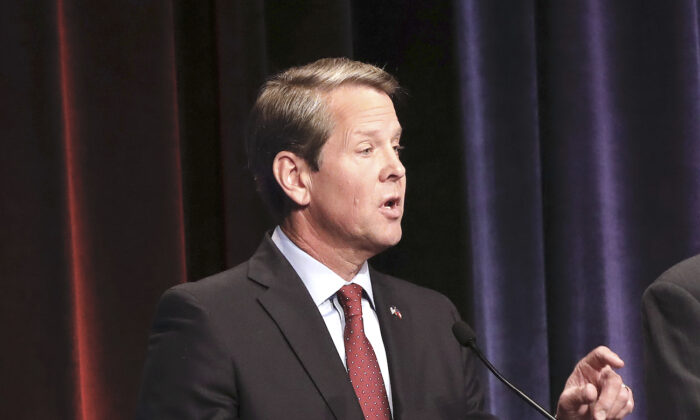 Beaches in Georgia that were closed over CCP virus fears re-opened under Gov. Brian Kemp’s executive order, which went into effect late Friday.

Kemp’s order says people can go outside to exercise as long as they stay at least six feet apart during COVID-19 pandemic. The disease is caused by the CCP (Chinese Communist Party) virus, commonly known as novel coronavirus.

The governor’s order supersedes all local ordinances that conflict with it.

“In concordance with Governor Kemp’s Executive Order, Georgia’s beaches are currently open. People who voluntarily leave their shelters to go to our beaches can only do so for the purpose of outdoor exercise,” Josh Hildebrandt, director of Public and Governmental Affairs for the Department of Natural Resources, told The Epoch Times in an email.

The use of chairs, tents, and umbrellas on beaches are prohibited as of April 3, under order by Mark Williams, commissioner of natural resources. The order is currently in effect until April 13.

Photos from Tybee Island – ⁦@GaDNRLE⁩ and ⁦@ga_dps⁩ report no issues as they patrol the beach and surrounding areas. Beachgoers are mostly locals and complying with social distancing orders. We will continue to monitor conditions. pic.twitter.com/aS9OCGUTUC

The Georgia Department of Public Safety and the Department of Natural Resources Law Enforcement division “report no issues as they patrol the beach and surrounding areas,” Kemp said.

“Beachgoers are mostly locals and complying with social distancing orders. We will continue to monitor conditions,” he said of Tybee.

People in St. Simon’s were also enjoying the beach but complying with social distancing measures, according to the governor.

Glynn County’s board of commissioners said in a statement, that, in compliance with Kemp’s order, beaches in the county are “open for purposes of exercise.”

“However the use of chairs, tents, and umbrellas on Georgia’s coastal beaches is prohibited,” they added, citing Georgia Department of Natural Resources guidance, from April 3 through April 13.

Everyone who visits a beach must maintain a distance of more than six feet from people who don’t live in their household, Glynn County officials said.

Kemp’s spokesperson Candice Broce told WTOC that roughly 150 people were on beaches at Tybee Island. Broce said she spoke directly with Tybee Mayor Shirley Sessions, who asked Kemp in a letter to allow the island’s beaches to remain closed.

“I have spoken directly with the Mayor and explained how we stand ready to provide resources to ensure compliance with the order,” Broce said, adding that Kemp was guided by recommendations from state Health Commissioner Dr. Kathleen Toomey, other public health officials, and emergency management officials.

Sessions said on Saturday that Kemp threatened any leaders who refused to follow the executive order with prison and/or fines.

“Tybee City Council and I are devastated by the sudden directives and do not support his decisions. The health of our residents, staff, and visitors are being put at risk and we will pursue legal avenues to overturn his reckless mandate,” she said.

Tybee won’t have beach access and parking lots will remain closed, according to the mayor. No lifeguards will be on duty.

In the letter, dated April 3, Sessions told Kemp that it would be “a devastating blow to the safety of our residents to reopen the beach at this time.”

The order only allows exercise on the beach by individuals or family groups but will not allow people to congregate, and guidelines will be enforced by law enforcement, Petrea added.