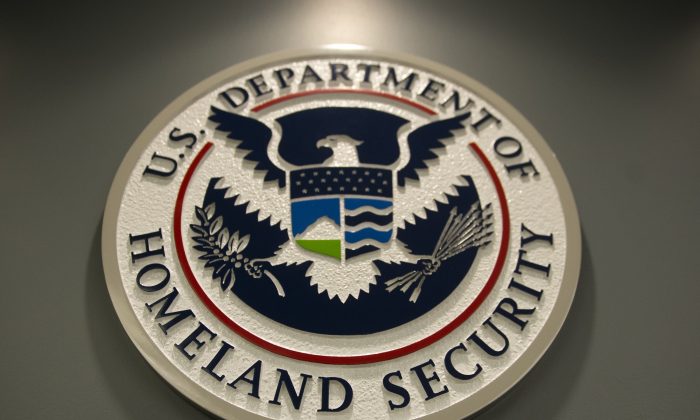 The logo of the Department of Homeland Security is seen at US Immigration and Customs Enforcement in Washington, DC, February 25, 2015. AFP PHOTO / SAUL LOEB (Photo credit should read SAUL LOEB/AFP/Getty Images)
US

At least 10 separate cyberattacks against the Georgia Secretary of State’s Office, which manages the state’s elections, were carried out by the U.S. Department of Homeland Security, Secretary of State Brian Kemp said on Wednesday.

Describing them as “failed cyberattacks,” Kemp said the timing was concerning, according to The Associated Press. The attempts, he told WSB-TV, were traced back to DHS ISP addresses and span the past 10 months.

“We’re being told something that they think they have it figured out, yet nobody’s really showed us how this happened,” Kemp was quoted as saying. “We need to know.”

Now, Kemp’s office is asking President-elect Donald Trump to investigate the alleged breaches. According to a letter he sent to Trump on Dec. 13,  Kemp said the DHS made attempts to “infiltrate our network” and attempted a “large attack” on Nov. 15, Politico reported.

For months, the state of Georgia has rejected DHS discussions on whether to classify its electoral infrastructure as “critical infrastructure,” saying it amounts to federal government overreach. Kemp suggested his criticism of the plan may have triggered DHS backlash.

“These scans correspond to key election dates and times when I was speaking out against DHS’ plans,” Kemp wrote in the letter.

Those dates include the day Kemp testified against the agency’s plan before the House Oversight Committee, the day of a conference call discussing the designation of critical infrastructure with Georgia officials, and Election Day, he said according to AP.

Discussions about whether to designate elections systems as critical infrastructure surfaced after hackers targeted the voter registration systems of more than 20 states in the months prior to the election. Some state officials worried the designation would amount to a federal takeover of election systems.

Kemp testified Sept. 28 before a House Oversight subcommittee, saying more federal oversight could make systems more vulnerable and could make protected records more accessible. He said the Homeland Security proposal came from “an agency completely unfamiliar with the elections space and raised the level of public concern beyond what was necessary.”

Before his testimony, his network had been scanned just hours before.

A week ago, the DHS confirmed a Nov. 15 attack to a U.S. Customs and Border Protection internet gateway, Kemp said, but he said the agency’s story keeps changing. “First it was an employee in Corpus Christi, and now it’s a contractor in Georgia,” Kemp told WSB-TV.

The workstation belongs to a contractor for the Federal Law Enforcement Training Center in Georgia, Johnson said. The contractor told investigators he was accessing the website as part of his normal job duties to determine whether incoming contractors and new employees had a certain type of professional license, Johnson said.

Johnson added that technical information indicated “there was no scanning of your systems by our cybersecurity experts.”

“There are more questions than answers here still,” he told Politico.

“The people of Georgia are very concerned about what exactly happened here, and they are demanding transparent and honest answers,” Kemp told Trump in the letter. “It appears that will not happen with the current administration.”