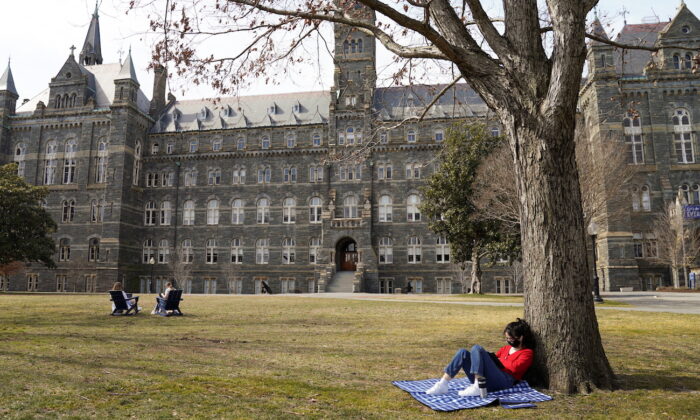 A student studies in the sunshine at Georgetown University in Washington, on March 9, 2021. (Kevin Lamarque/Reuters)
Education & Family News

A constitutional law professor at Georgetown University said he no longer wants to work at the institution, which had suspended him for months for questioning race and gender criteria used by the Biden administration in its selection of Supreme Court justices.

Ilya Shapiro, who was recently permitted to assume his post as executive director of the Georgetown Center for the Constitution, said on Monday that the university has created a work environment so hostile that it’s practically impossible for him to express his views.

“I won’t live this way,” the professor wrote in his resignation letter. “I have no choice but to resign.”

Shapiro became a target of progressives in January because of a series of Twitter posts in which he criticized President Joe Biden’s use of identity politics to only consider black women in his choice of a replacement for retiring Justice Stephen Breyer on the U.S. Supreme Court. Georgetown’s Black Law Students Association called for his firing. Georgetown Law Dean William Treanor placed him on leave, pending the outcome of an investigation by the office of Institutional Diversity, Equity and Affirmative Action (IDEAA).

The IDEAA investigation found that Shapiro’s comments were “harmful” and caused “pain” in the campus community, but agreed that technically Shapiro shouldn’t be punished, since he wasn’t yet a Georgetown employee when he wrote those comments.

Following that logic, according to Shapiro, it’s only a matter of time before the university moves to punish him again for saying something that someone somewhere finds offensive.

“The IDEAA Report found that ‘if [I] were to make another, similar or more serious remark as a Georgetown employee, a hostile environment based on race, gender, and sex likely would be created,'” he wrote in the letter to Treanor. “On this theory, all sorts of comments that someone—anyone—could find offensive would subject me to disciplinary action.”

“This would be a huge Sword of Damocles over my head as I try to engage in my educational mission,” he added.

Shapiro moved on to list a number of recent incidents in which students claimed to feel “unsafe” or offended because of his opinions on topics such as abortion, the Second Amendment, freedom of speech, and gay marriage. He said each of these purported offenses would subject him to IDEAA investigation and discipline.

“Nobody can work that way,” the professor told the dean. “Ironically, it is you and IDEAA who have created an unacceptably hostile work environment for me on account of my political views and affiliations.”

“When Prof. Fair advocated murder and castration based on race and gender, Georgetown did not initiate an investigation, but instead invoked Georgetown’s free expression policy,” Shapiro wrote. “Apparently it’s free speech for thee, not for me.”

In response to a request for comments, a spokesperson for Georgetown Law insisted that the school protects speech and expression and works to “promote civil and respectful discourse.”

“Our speech and expression policy promotes free and open inquiry, deliberation, and debate and does not prohibit speech based on the person presenting ideas or the content of those ideas, even when those ideas may be difficult, controversial or objectionable,” the spokesperson said, adding that the university “followed the regular processes for members of the Law Center staff” when reviewing Shapiro’s conduct.