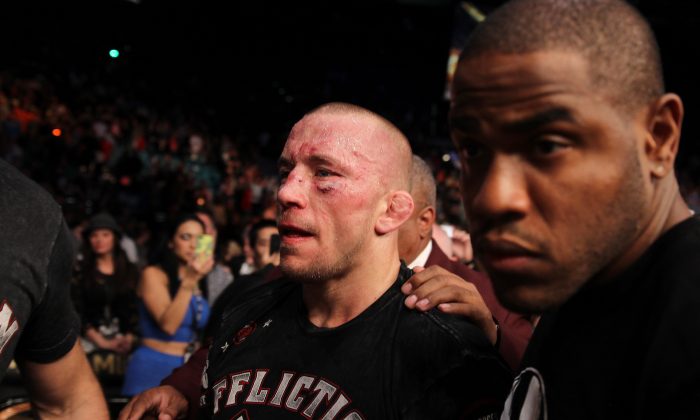 Hendricks beat Lawler via a decision a few months ago to take the title.

“The good old Johny Hendricks as he’s always been, I believe Hendricks is supposed to win,” he said, according to MMA Fighting.

And St-Pierre, who was the top draw for the UFC for years, has said he’s unsure if he’ll ever return to the octagon, but his ex-boss Dana White is saying otherwise.

Last year, St-Pierre walked away from the sport after defeating current champ Johny Hendricks in a controversial decision. He also tore his ACL and only started training again recently.

“I don’t know if I will go back to competition. That’s why I didn’t call it ‘a retirement,’ I called it ‘a break’ because I don’t know. [Light heavyweight boxer] Bernard Hopkins has a good analogy. He says, ‘You can’t ask a woman who just gave birth and suffered for many hours if she will have another baby again.’ Same thing for me when I got out of competition,” he said.

White, however, said this week that St-Pierre will be back.

“Lorenzo (Fertitta, UFC chairman and CEO) and I went up and met with him up in Canada, and he’s getting back into training,” White said, via Bloody Elbow. “As soon as he’s ready to fight, he’ll let us know, but I’m very confident he’s coming back.”

White said in September that if St-Pierre wants to come back to the UFC, he will be granted a title shot immediately.