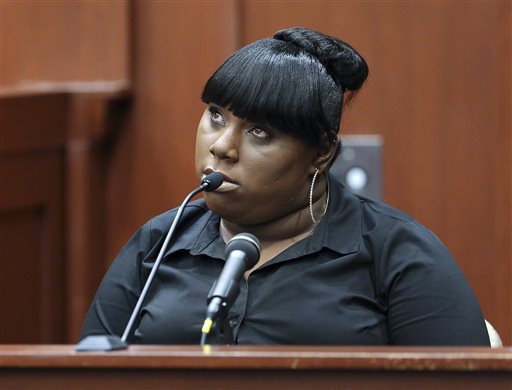 Rachel Jeantel, the witness that was on the phone with Trayvon Martin just before he died, gives her testimony during George Zimmerman's trial in Seminole circuit court in Sanford, Fla., Wednesday, June 26, 2013. Zimmerman has been charged with second-degree murder for the 2012 shooting death of Trayvon Martin. (AP Photo/Orlando Sentinel, Jacob Langston, Pool)
US

Rachel Jeantel,, the last person to speak with Trayvon Martin before he died, gave an interview with MadamNoire.com, published on Monday.

“If I had to testify all over again, I would have been more prepared. I was not prepared for the trial last year. especially concerning the media,” she told the site.

Jeantel added: “I know how to deal with the media now, but before then I did not. It was my first time on television. I was not used to the news cameras or paparazzi. Initially I was like “uh nuh!” when they would continuously ask me questions or take pictures. That’s why by time I took the stand, I was just ready to go! It was too much for me. Now I know how to deal with all of the attention. Also I would have learned proper grammar and how I should speak or what should I say when I am on trial. With what I know now, I would have done a better job.”

When remember Martin, she said that “Trayvon was a smart young man. I’m not going to lie, he used to help me with my math schoolwork so my grades could be good. Math was his strong point.”

According to reports in late July, Zimmerman was allegedly “spotted back on patrol this weekend in Central Florida,” according to CNN.

He was seen at a store in DeLand, Fla., at a store that sells guns, ammunition, and motorcycles.

The owner of the store, Pompano Pat’s, told CNN: “George is a personal friend. My store was robbed recently and George was just keeping an eye on things as a friend.”