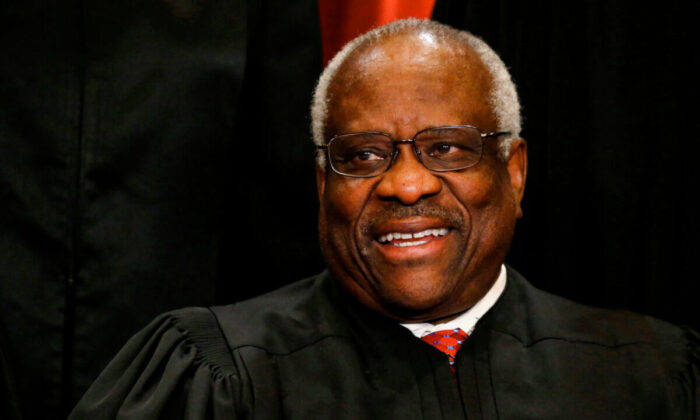 Thomas has lectured at GW since 2011. According to the university, he is set to teach this fall a constitutional law seminar aimed at helping students get “a more complete story” of famous Supreme Court cases by exploring “additional facts” that are lesser known about the social and political context surrounding the court’s decisions. The class is co-taught with Greg Maggs, a professor who clerked for Thomas and retired Justice Anthony Kennedy.

Last week, originalist Thomas joined in a 6-3 majority decision to overrule the Supreme Court’s 1973 decision in Roe v. Wade, which legalized abortion at a national level. The new decision doesn’t outlaw abortion, but instead hands the question of abortion access back to individual states.

In his concurring opinion, Thomas suggested that the high court should “reconsider” cases that were decided by the same logic that Roe was decided, including Lawrence v. Texas of 2003, which decriminalized consensual gay sex, and Obergefell v. Hodges of 2015, which established a constitutional right to gay marriage.

The mere suggestion that the high court should revisit these decisions motivated progressive students at GW to circulate an online petition calling for Thomas’s removal from the law faculty.

“With the recent Supreme Court decision that has stripped the right to bodily autonomy of people with wombs, and with his explicit intention to further strip the rights of queer people and remove the ability for people to practice safe sex without fear of pregnancy, it is evident that the employment of Clarence Thomas at George Washington University is completely unacceptable,” read the petition.

The petition further claims that Thomas has allegedly created an “unsafe” environment for GW students, as well as for students at “thousands of campuses across the country.”

“Make your voice heard and help us kick Clarence Thomas out of Foggy Bottom,” the petition reads. The effort has garnered over 7,000 supporting signatures at the time of publication.

Not all students at GW agree with the petition. The GW chapter of the College Republicans have condemned the effort, arguing that college students are meant to be exposed to ideas that are different from their own.

“GW College Republicans is strongly opposed to the recent petition calling for Justice Thomas to be removed from the GW Law faculty,” the organization said in a statement to The Epoch Times. “One of the principal assets of our school is learning from figures across the ideological spectrum.”

Read More
Chapter Seven, Part I: The Destruction of the Family (UPDATED)

“While many students at GW are displeased with [Thomas’s] rulings on particular cases, the free exchange of ideas and opinions should be valued—not discouraged—at an institution of higher learning like ours,” the statement continued.

“Removing Justice Thomas from the university will do the greatest disservice to those most fervently propagating this petition.”

In a statement released on Tuesday, university leaders said that Thomas is going to teach his class this fall as scheduled, even though his views “do not represent the views of either the George Washington University or its law school.”

“Justice Thomas has been a consistent critic of the Court’s legal philosophy on substantive due process for many years,” GW Provost Christopher Bracey and Law School Dean Dayna Matthew said. “Because we steadfastly support the robust exchange of ideas and deliberation, and because debate is an essential part of our university’s academic and educational mission to train future leaders who are prepared to address the world’s most urgent problems, the university will neither terminate Justice Thomas’ employment nor cancel his class in response to his legal opinions.

“Like all faculty members at our university, Justice Thomas has academic freedom and freedom of expression and inquiry,” they added.

The petition comes as pro-Roe advocates on social media barraged Thomas, the only sitting black justice on the nation’s highest court, with racial slurs and derogatory terms, such as the n-word, “coon,” “slave,” and “Uncle Tom.”

Over the weekend, “Uncle Clarence” became trending on Twitter after it was used by actor Samuel Jackson, who is black.

“How’s Uncle Clarence feeling about Overturning Loving v Virginia??!!” Jackson wrote, referring to the 1967 case that declared the ban on interracial marriage to be unconstitutional. Thomas is married to Ginni Thomas, a white woman and conservative activist.