The Art of a Beautiful Friendship: George Washington Portrait at the Battle of Princeton
0
Share Now
TelegramFacebookTweetEmailTellMeWeReddit
Copy Link 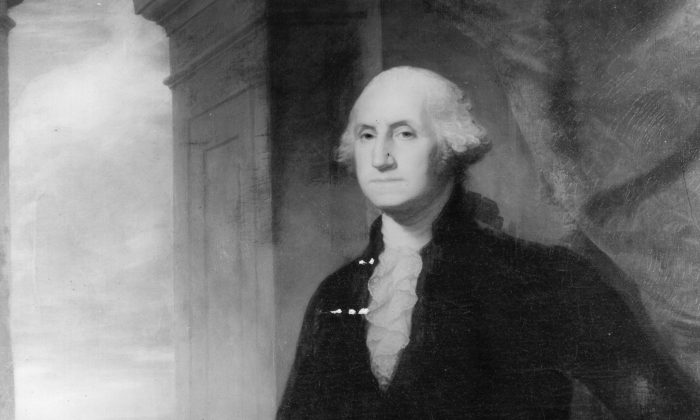 George Washington and the Red Pill

A description of George Washington’s transformation from gentleman planter to revolutionary patriarch of a nation could be a real-life template for Neo, the protagonist of “The Matrix” and a character likewise awakening to his seminal role as a revolutionary agent of liberty, after swallowing a red pill.

Washington, as an ambitious young man and Virginian gentleman, had sipped the sweetness of colonial life—despite the vine of tyranny sending out ever more encompassing and invasive tendrils to imperceptibly envelop the unfettered trellis of liberty that Virginians had constructed for themselves.

In retrospect, it was an idyllic state, so like the intended Providence for men as to be almost dream-like.

Then, as liberty began to recede under the weight of tyranny, clutched by tendrils of taxation, legal bindings, and the exertions of monarchical force upon people of the colonies—up to and including the corruption of blood—a maturing Washington began to awaken, through circumstance and the shared counsel of his contemporaries, to his part in casting off tyranny, to restore and secure the blessings of liberty for the budding nation and its posterity.

Thus, reluctantly, did Washington come to find himself, over the course of events in the dire, dark, and despairing winter of 1776, huddling with men in the field in some of the worst winter snow and bitter cold on record for the nation. Absent of sufficient rations, medicine, supplies, arms, treasure, comfort, or numbers, they clung tenuously to the shore of hope along the frozen western bank of the ice-caked Delaware River.

Celebrated patriot Thomas Paine, who had followed these American revolutionaries across their New Jersey retreat, famously wrote, “These are the times that try men’s souls.”

Reeling from discouraging defeats, with the sour taste of retreat and even treason sharp on his tongue, while the Continental Congress bickered over particulars, while the remnants of the Continental Army withered by the hour in the depths of privation, with enlistments about to run out, and while American liberty itself hung precariously in the balance, an impulse began to emerge from deep within Washington’s breast.

In the lonely hours of the commander in chief’s greatest need, a primordial compulsion, innate and unyielding, unbidden yet familiar and universal to all men, arose to compel him to action: the intrinsic impulse to freedom.

Against all convention, against all odds, and even against much sober counsel, Washington would act.

With Washington in the vanguard, the revolutionaries crossed the Delaware River on Christmas night, in daunting, frightful conditions, to crush the monarch’s hessian mercenaries garrisoned at Trenton the next morning.

A thousand of the enemy were captured, injured, or killed.

Full consummation of Washington’s impulse was near at hand, and the light of liberty once again began to flicker a little more brightly over the land. The general grew anxious to extend the moment’s initiative to full advantage.

The day before New Year’s Eve, he again crossed the Delaware from the west—in even more desperate conditions—and issued a proclamation at Trenton that the Continental Army had returned, calling on the whole of the people to rise up against the enemy and drive them from the land. So it was on Jan. 3, 1777, that 1,500 continentals met a proportionate number of the enemy at Princeton.

The fighting became general, as the monarch’s minions fought with the resolve of battle-hardened troops.

At a critical moment, an American brigadier was mortally wounded and his command—despite reinforcement from militia—wavered and fell back.

If liberty were not to be extinguished in America, there must appear someone now—right now—to redeem her.

Anyone who believes the affairs of mankind do not hinge upon the greatness of men has not long considered the achievements of George Washington.

On white horse, Washington galloped forward at the head of most of his men.

The Mount Vernon Ladies’ Association of the Union described what passed next: “Amidst the flying musket balls Washington coolly assured his soldiers, ‘Parade with us my brave fellows! There is but a handful of the enemy and we shall have them directly!’ Washington then led the militiamen forward to the front. He at one point was only 30 yards from the British line—easy musket range.

“One of Washington’s officers reportedly pulled his hat over his eyes, expecting to see the general shot from the saddle at any moment. Despite his proximity, Washington remained uninjured and his galvanizing presence stabilized the American line at a critical moment in the battle. Soon Washington, along with fresh reinforcements, [was] chasing the remnants of the enemy’s broken force through the fields and woods.”

Washington biographer Harrison Clark described it thus: “Washington himself came up with the greater part of his men. Charging ahead on his horse he rallied the Americans, telling them to hold their fire. The enemy shot first and there was a great cloud of smoke around the general. Then Washington called the order to charge and fire and the British lines broke. Washington and his cavalry pursued them, while others chased the enemy as far as four miles on foot.”

Washington charged to the front—perhaps intuitively, perhaps consciously—in realization of the moment of sacred conviction, the crucible test when a man girds up his loins to throw into the balance everything he ever had or can have, including every sinew and fiber of his being, at the cost of even his very life. In the close press of duty, renouncing without qualm or compunction that sweetness of partaking in family, friends, in even liberty itself, Washington committed himself resolutely to the course.

This decisive instant was Washington’s point of no return, his swallowed red pill—the selfless moment of his perfection as a man, as a patriot, as a leader; the moment of his sublime, solemn consummation. From this point forward, there would be no looking back.

George Washington was all in.

Soon enough, the creator’s gift of liberty to all people had been secured again for a time in America, and in that reality lay hope for all the world.

Later, after the dust of battle and the travail of years and precedent in consolidating a government of the people, by the people, and for the people had long settled in the new United States, a matured and reflective Washington gave us his final, priceless gift.

Solicitous as ever for the welfare of fellow citizens and for their posterity, Washington favored us with his hard-won wisdom and paternal counsel in his timeless “Farewell Address To The People of The United States.” It stands alongside the Constitution and the Declaration of Independence, forming the seminal trinity of American political letters.

We ignore its sage dictums at our eternal peril.

Trajectory of awakening consummated, Washington passed from this earthly realm in 1799 as the venerated father of a grateful nation and the protector of liberty in America, taking his place among the immortal champions of the pantheon of freedom.

Citizens, should we each, in turn, fulfill the restored promise of liberty in our own trajectories, freedom shall ever live upon this earth.

Philip E. Brooks is an American writer, speaker, award-winning pilot, filmmaker, investigator, designer, and entrepreneur. He advocates for the return of George Washington’s “Farewell Address To The People of The United States” to public view. His great-grandfather, Joseph Woodell, was a first lieutenant in Gen. Washington’s revolutionary Continental Army in the Virginia campaigns of 1781. Brooks serves now in the Ministry of the Doers of the Word Baptist Church of Newbury, Ohio.

Philip E. Brooks
Follow
Philip E. Brooks is an American writer, speaker, award-winning pilot, filmmaker, investigator, designer, and entrepreneur. He advocates for the return of Washington’s “Farewell Address To The People of The United States” to public view. His great grandfather Joseph Woodell was a first lieutenant in General Washington's revolutionary Continental Army in the Virginia campaigns of 1781. Brooks serves now in the Ministry of the Doers of the Word Baptist Church of Newbury, Ohio.
TOP NEWS