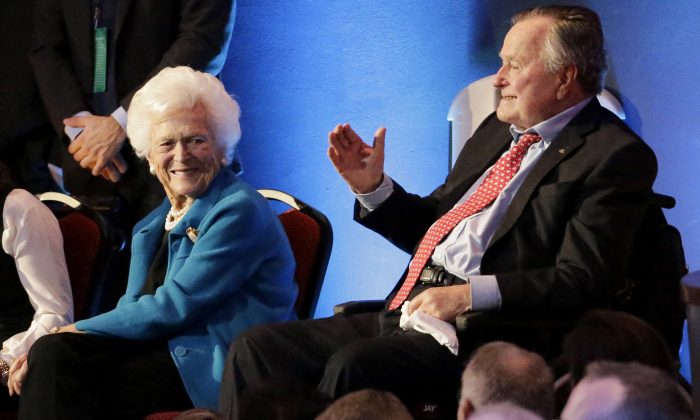 Former President George H. W. Bush (R) and his wife, Barbara, are greeted before a Republican presidential primary debate at The University of Houston in Houston, in this file photo. (AP Photo/David J. Phillip)
US

George W. Bush to Be in DC Despite Dad’s Health

Former President George W. Bush still plans to attend President-elect Donald Trump’s inauguration this week even though his father and mother are hospitalized in Houston.

Freddy Ford is a spokesman for the younger Bush in Dallas. He said Wednesday that the 43rd president expects to be in Washington on Friday and doesn’t plan to travel to Houston.

Bush’s 92-year-old father, former President George H.W. Bush, was hospitalized for respiratory issues over the weekend. Barbara Bush was hospitalized as a precaution Wednesday for fatigue and coughing.

Last week, George H.W. Bush cited health concerns when announcing he couldn’t attend the inauguration. In a letter to Trump, Bush said his doctor told him that if he sat outside in January, “it likely will put me six-feet under. … Same for Barbara. So I guess we’re stuck in Texas.”

But he offered Trump help, if needed, and wished him “the very best as you begin this incredible journey of leading our great country.”