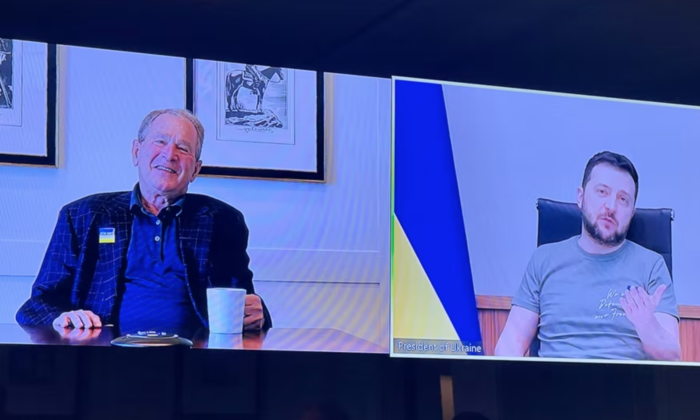 “I was honored to spend a few minutes talking with President Zelenskyy—the Winston Churchill of our time—this morning. I thanked the President for his leadership, his example, and his commitment to liberty, and I saluted the courage of the Ukrainian people,” Bush said in a statement released through the George W. Bush Presidential Center.

“President Zelenskyy assured me that they will not waver in their fight against Putin’s barbarism and thuggery. Americans are inspired by their fortitude and resilience. We will continue to stand with Ukrainians as they stand up for their freedom,” he added.

Zelenskyy, who outlined their virtual discussion in a release, invited Bush to visit Ukraine and thanked the United States and the American people for supporting his countrymen, while also noting the sympathy his people felt for Americans after the 9/11 terrorist attacks in 2001.

“I saw how people in the United States treat us on social networks, they take to the streets, support Ukraine with flags,” said Zelenskyy.

Zelenskyy went on to note the common values shared by Ukrainians and Americans, who he described as “sincere, open-minded people.”

Meanwhile, Bush pledged continued American support in Ukraine’s fight and told Zelenskyy that his country and its people’s firm stand against the invading Russian forces “that want to kill innocent people” had inspired Americans.

“Your courage is very important for further success. If you continue to do what you do, you will always have our support if you continue to fight as you do now,” Bush said, according to the Ukrainian government’s release.

This comes as the United States moves to strengthen its support for Ukraine, with U.S. President Joe Biden asking Congress on April 28 to approve a $33 billion aid package, and as U.S. officials visit the country, including House Speaker Nancy Pelosi.

However, the aid package faces hurdles as some Democrats seek to attach an unrelated $10 billion COVID package to the bill.

The aid package, which Pelosi hopes will be voted on next week, includes $20.4 billion in military assistance along with $8.5 billion in economic assistance. The package also includes $3 billion in humanitarian assistance to address food shortages around the globe.

“Since Russia invaded Ukraine just over two months ago, we have sent more than $3 billion in security assistance to Ukraine— alone, us—not counting our Allies. And that money is a direct investment in defending freedom and democracy itself,” Biden said in a May 3 speech at Lockheed Martin Pike County Operations in Alabama, where they build the around 5,500 Javelin missiles that have been sent to bolster Ukraine’s defenses.

The United States has also trained around 23,000 Ukrainian service members in weapons and combat at the Yavoriv Combat Training Center in the Lviv region of western Ukraine right up until the Russian invasion in February, according to the Department of Defense.