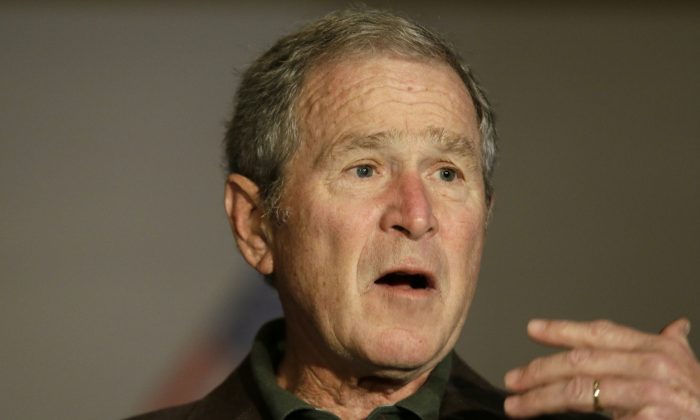 Former President George W Bush speaks during a preview of an exhibition of his paintings of U.S. military veterans in Dallas, Tuesday, Feb. 28, 2017. President Bush says he didn't intend to criticize President Donald Trump when he said recently that a free press is essential to democracy. (AP Photo/LM Otero)
Politics

Former President George W. Bush didn’t intend to criticize President Donald Trump when opining on the role of free press in a democracy.

While promoting his new book, Bush was interviewed by NBC TODAY’s Matt Lauer on Feb. 27. During the interview, the host asked him, “Did you ever consider the media to be the enemy of the American people?”

Bush replied: “I consider media to be indispensable to democracy. We need the independent media to hold people like me to account. I mean, power can be very addictive, and it can be corrosive, and it’s important for the media to call to account people who abuse their power, whether it be here of elsewhere. One of the things I spent a lot of time doing was trying to convince a person like Vladimir Putin, for example, to accept the notion of an independent press. It’s kind of hard to tell others to have an independent free press when we’re not willing to have one ourselves.”

A day later, Bush told The Associated Press he was simply responding to a question about the role of journalism, not criticizing Trump.

On many occasions, Trump has criticized a loosely outlined group of media outlets for producing inaccurate reports, calling them “fake news.”

The FAKE NEWS media (failing @nytimes, @NBCNews, @ABC, @CBS, @CNN) is not my enemy, it is the enemy of the American People!

Trump, however, rejected suggestions that he opposed the media in general.

Bush said the current polarization of the media complicates Trump’s job of unifying the country.

“I think you have to take the man for his word that he wants to unify the country, and we’ll see whether he’s able to do so,” he told Lauer. “It’s hard to unify the country, though, with the news media being so split up. When I was president, you know, you mattered a lot more, because there was, like, three of you. And now there’s all kinds of information being bombarded out and people can say things anonymously. It’s just a different world.”

Bush’s new book, “Portraits of Courage,” is a volume of his paintings of military veterans.