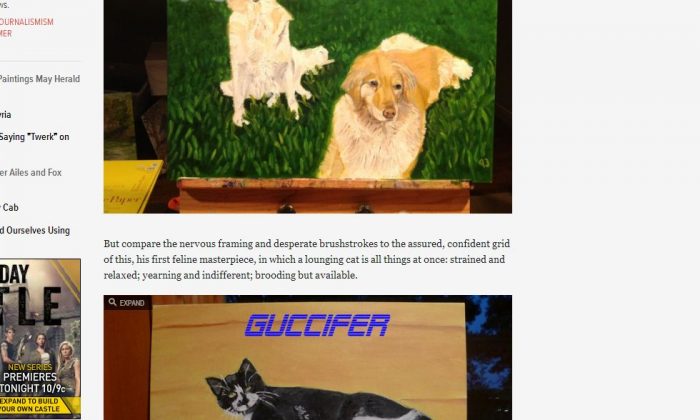 A screenshot of Gawker.com shows the new cat and dogs paintings.
US

George W. Bush is Painting Cats Now After Around ‘ 50 Dogs’

Former President George W. Bush, who took up painting in his retirement, is apparently now painting pictures of cats, following a series of paintings of dogs, according to a report.

Gawker.com on Tuesday said that Bush painted two pictures of recently, which were obtained by hacker Guccifer–one showing a cat and the other showing two dogs.

“May the cat period be as fruitful, as breathtaking, as charged with energy as the ‘over 50 dogs,’” Gawker writer Max Read quipped, adding the painting of the cat is Bush’s “first feline masterpiece, in which a lounging cat is all things at once: strained and relaxed; yearning and indifferent; brooding but available.”

It is unclear how Guccifer obtained the images.

Bush painted several other pictures of cats, according to images released by the hacker.

Earlier this year, Bush’s art teacher, Bonnie Flood, said that the ex-president is a quick learner.

“He has such a passion for painting, it’s amazing,” she told Atlanta-based WAGA-TV. “He’s going to go down in the history books as a great artist.”

“I think he said he painted 50 dogs,” Flood added. “He pulled out this canvas and started painting dogs and I thought, ‘Oh my God, I don’t paint dogs!”

Earlier this year, hackers published e-mails from the Bush clan, which included information about Bush’s interest in painting.