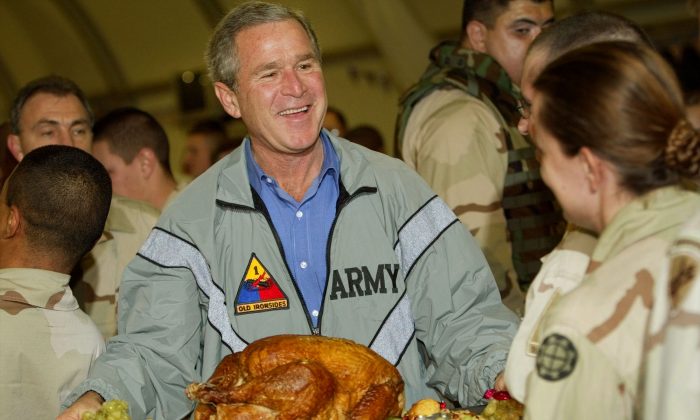 The hoax in question refers to a situation when the former president traveled to Iraq in 2003 to have a surprise dinner with troops there.

Bush is pictured holding a tray that has a cooked turkey in the middle. But many claimed that the turkey in the photo was fake, including the New York Times and the Boston Globe.

It was dubbed “Turkey-gate” by one CNN reporter.

“It’s a real theme in so many people’s minds, it’s almost got a religious aspect to it,” Tim Blair, a columnist at The Daily Telegraph in Australia, told the Washington Times.

Blair has tracked the story over the past 10 years.

The situation was that Bush made a secret trip to Iraq to spend the holiday with the troops. Dan Bartlett, a former Bush aide, said troops were expecting someone important, but not the president.

“They were dumfounded — they just couldn’t believe he would do it,” Bartlett said.

While Bush was there, he picked up the tray with the “beautifully roasted turkey,” as the Washington Times put it. Photographers took photos of the moment.

A week later, reporter Mike Allen with the Washington Post, wrote a story that the turkey was a centerpiece decoration and was meant to adorn the serving line, not to be served to the troops. Allen alleged that the decoration was used by the White House to positively promote the trip. Soon, many stories called the turkey fake and plastic.

Blair said he found more than 70 times where over the three years after the Thanksgiving that reports called the turkey fake or plastic. Wrongly. Blair found some of it was started by Mark Lawson of the Guardian, who was then repeated by other outlets such as the Australian and the Sydney Morning Herald.

Few outlets corrected the reports. The New York Times even published an article this November with the word “fake” in it, though it corrected it later.