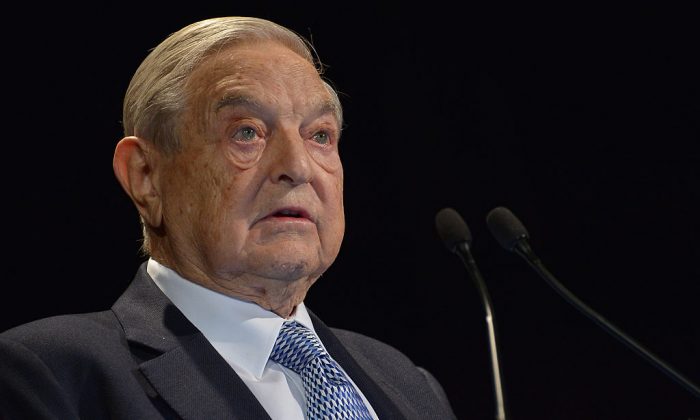 Judicial Watch is a conservative-leaning watchdog group that regularly files Freedom of Information Act (FOIA) lawsuits to expose alleged misconduct of government officials. The organization has more than 20 ongoing lawsuits that involve former Secretary of State Hillary Clinton. But it has filed suits against the administrations of Bill Clinton, George W. Bush, and Barack Obama.

The group has put pressure on Clinton to answer questions about emails deleted from a private server.

Soros and other Democratic leaders met in Washington, D.C., last week for several days as part of Democracy Alliance’s annual investment summit. The DA stipulates that its 100 or so members donate at least $200,000 per year to approved groups, which include Media Matters and Planned Parenthood, according to Politico.

The Daily Caller reported that Soros apparently wants to start a liberal-leaning version of Judicial Watch to go after Donald Trump’s administration after he takes office on Jan. 20, 2017. More details about the organization, including the name, were not disclosed.

The Epoch Times reached out to Judicial Watch, and a spokesperson responded via email, pointing back to quotes that were given to the Daily Caller.

“We’re always happy when there’s more government transparency,” Judicial Watch President Tom Fitton said. “The left and the right need to take that issue more seriously and commit to it.”

He added that he welcomes the group if it is “principled and non-partisan.”

“No matter what happens under the Trump administration, Judicial Watch will be there,” Fitton added.

“We should not learn the wrong lesson from this election,” said an unnamed Democratic operative active in the DA, reported Politico. “We need our people to vote in greater numbers. For that to happen, we need candidates who inspire them to go to the polls on Election Day.”