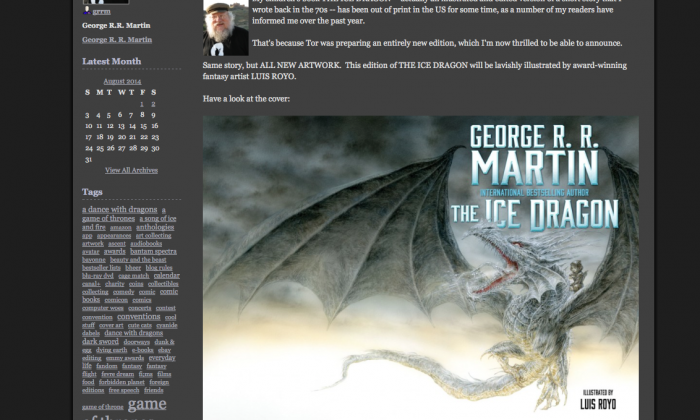 Screenshot of author George R. R. Martin's blog where he announced that he will be re-releasing the children's novel "The Ice Dragon."
Entertainment

Although it’s not the next in “A Song of Ice and Fire” series, author George R. R. Martin will be re-releasing his 1980s a children’s book “The Ice Dragon.”

The story takes place in Westeros, the “A Song of Ice and Fire” universe. The cover of the book is exactly what would have been expected from the author of the novels that are the basis for the “Game of Thrones” TV series.

The story will remain the same, except there will be all new illustrations.

Martin wrote on his blog that the books will be available in select book stores starting in October 21, 2014.

When asked about the appropriateness of the front cover illustration of the book cover, which was deemed scary by some, Martin replied that when he was young, he thoroughly enjoyed scary novels.

“That’s what hiding under the covers is for…” he wrote on his blog.

Although Martin did think that kids under four might bee too young for the novel. You can view Martin’s blog post here.