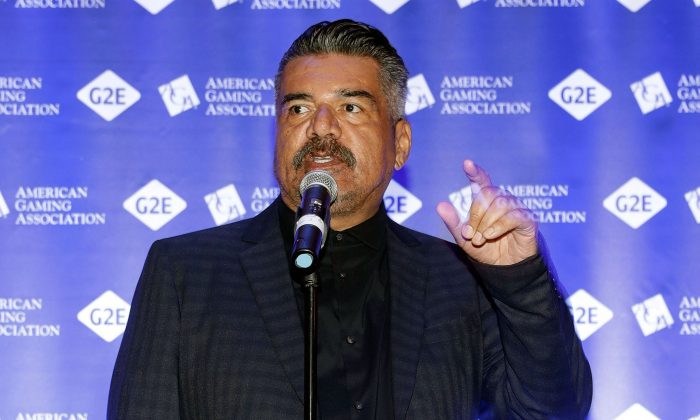 Comedian and actor George Lopez was caught on camera getting aggressive with a patron of a Hooters restaurant in Las Cruces, New Mexico, on Oct. 14.

Law enforcement sources confirmed that Lopez was charged with misdemeanor battery over the incident, Fox News reported on Nov. 10.

TMZ published video of the man saying, “Here comes my boy George,” as Lopez walks right up to him and reaches for the man’s phone, which was recording the incident.

“Jorge Lopez!” The man says in the video, using the Spanish version of George’s first name. “Look at him! He wants to fight me!” Lopez can be seen grabbing the man’s neck.

The 57-year-old comedian was in town filming the movie “Walking With Herb,” according to TMZ. An anonymous source told the publication that the man had been heckling Lopez earlier in the evening, making pro-Trump comments and saying “MAGA.”

However, the man on the video later contacted TMZ and claimed he had only wanted a photo with Lopez that night and had cracked a joke to try to make him smile. The man said he was a registered Democrat and already knew that Lopez was not a fan of President Trump.

He said he approached Lopez’s table only once and asked for a picture with him. Instead, the star grabbed his phone and appeared to try to film his own crotch, although the phone was not recording.

Lopez eventually gave the phone back, said the man, who tried to joke around by saying, “On the count of three, say Make America Great Again!” However, Lopez was not amused.

The man met up with Lopez again while the star was on his way out of the restaurant, which is when the video started.

No one was injured in the incident, but the police were notified. Officers said they were investigating.

Lopez has been known to share his views about Donald Trump in the past. In July, a video emerged in which the comedian used a water bottle to pretend to urinate on Trump’s star on the Hollywood Walk of Fame.

In October of last year, Lopez performed at a charity diabetes event in Denver, Colorado. However, his anti-Trump jokes got him booed off the stage.

Lopez’s upcoming independent film “Walking With Herb” is a faith-based movie based on a novel by Joe Bullock, according to Deadline. Ross Marks is directing the film. Both Bullock and Marks are natives of Las Cruces, New Mexico.

In the film, Joe, a 65-year-old former amateur golfer is sent a message by God to play in the World Golf Championship tournament. Comedian Lopez plays a motorcyclist named Herb, who helps Joe on his journey.