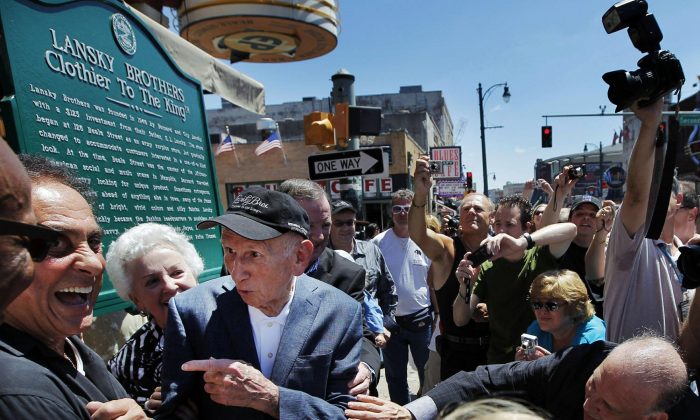 Memphis DJ George Klein, left, jokes with Lansky Brothers founder Bernard Lansky, second from left, "Clothier to the King" during the unveiling of a new plaque to mark the original location of the historic clothing store on Beale St. in Memphis, Tenn., on Aug. 14, 2011. (Jim Weber/The Commercial Appeal via AP, File)
Entertainment News

MEMPHIS, Tenn.— George Klein, the deep-voiced radio personality who became friends with Elvis Presley in high school and stayed close to the King of Rock ‘n’ Roll throughout his career, has died. He was 83.

Presley’s former wife, Priscilla Presley, told The Associated Press that Klein died at a hospice in Memphis, Tennessee, on Feb. 5. Priscilla Presley said Klein had been suffering from illness, including pneumonia, for about two weeks. She said she had been in constant contact with Klein and Presley’s other close friends, including Jerry Schilling and Marian Justice Cocke, while Klein was ill.

Klein met Elvis Presley in 1948 at Humes High School in Memphis and they were close friends until the rock ‘n’ roll icon died in 1977. Klein was part of Presley’s entourage, known as the “Memphis Mafia,” and enjoyed telling stories about the times he and Presley spent together.

Priscilla Presley said her former husband liked Klein’s outgoing personality, his loyalty, and his sense of humor. She called their friendship a “guy’s thing,” with their own inside jokes and “their own language.”

“Their friendship was golden, truly golden,” she said in a phone interview from Los Angeles on Tuesday night. “I don’t think I’ve ever heard George say anything bad about anybody.”

Presley served as Klein’s best man, and Klein was a pallbearer at Presley’s funeral. Klein appeared in his friend’s film, “Jailhouse Rock.” When Presley was posthumously inducted into the Rock & Roll Hall of Fame in 1986, Klein made the acceptance speech.

Klein hosted a radio show featuring Presley’s music on Sirius XM. He had also hosted radio and television shows in Memphis dating to the 1960s. Klein was known throughout the city, speaking at charity events for no pay, Priscilla Presley said.

University of Kentucky basketball coach John Calipari, a former head coach at the University of Memphis, said on Twitter that he would talk basketball with Klein before and after games.

“He has been an unbelievable ambassador for the city, for Graceland, for Elvis Presley and his family,” Calipari wrote.

In recent years, several friends of Elvis Presley—Scotty Moore, Red West, D.J. Fontana—have died. Priscilla Presley said she has thought about that, and calls it “a reality check.”

Funeral arrangements have not been released.