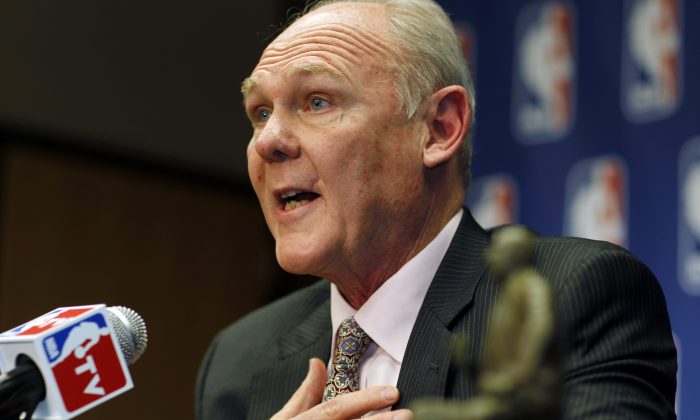 Denver Nuggets head coach George Karl responds to questions from reporters during a news conference where he was named the NBA Coach of the Year, Wednesday, May 8, 2013, in Denver. (AP Photo/David Zalubowski)
NBA

George Karl would be interested in becoming coach of the Orlando Magic, replacing the just-fired Jacque Vaughn, according to a new report.

“In the past, George Karl had said that he preferred a team out West, but sources say he would be interested because Magic job is attractive,” reported Alex Kennedy of Basketball Insiders.

Vaughn’s firing was rumored for weeks and officially announced on Thursday, after the Magic’s string of losses pushed them down among the bottom five teams in the league.

Scott Skiles has emerged as a serious candidate to eventually take over as head coach, reported Adrian Wojnarowski of Yahoo. Skiles is a popular ex-Magic player who has coached the Suns, Bulls, and Bucks.

However, there has been no contact between the team and Skiles as of yet.

“As the Magic move toward a tougher, more disciplined regime, ex-Sacramento Kings coach Mike Malone could become a consideration, too. Another candidate with a winning track record, Vinny Del Negro, is also available in the short-term,” Wojnarowski said.

“The young core of talent in Orlando makes Magic an attractive coaching job, especially based on how few openings there could be this year,” Wojnarowski added.

Jackson took the Warriors the playoffs in consecutive years but was fired after an early exit last season. Golden State under new coach Steve Kerr has the best record in the league, a significant improvement over last season. The coaching change is partially credited for the improvement.