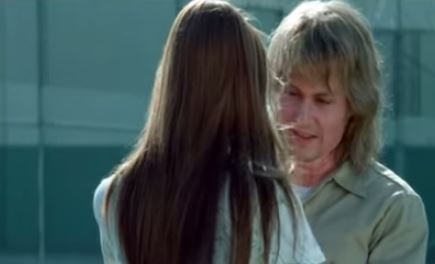 George Jung as portrayed in the movie "Blow," with his daughter. (YouTube)
Crime and Incidents

George Jung finally got his release from prison this week and is wasting no time in getting his family affairs in order.

Jung spoke to his daughter Kristina over the phone on Monday, shortly after he was released about a half-a-year earlier than scheduled for unspecified reasons.

Jung is perhaps best-known for being portrayed in the movie “Blow,” by Johnny Depp. In the film, his relationship with his daughter does not end well.

In real life, Jung was arrested once when Kristina was only one years old, and again several years later.

A representative of Jung’s told TMZ that Kristina did visit her father a few times while he was in prison, and that they have made plans to see each other in the near future.

Jung also made his first public comments since his release, saying that the first thing he ate after he got released was clam chowder, New England style.

He was also asked if he had anything else to say.

“Life’s a rodeo, and the thing you have to do is stay in the saddle,” Jung said, smiling. “And I’m back in the saddle now.”