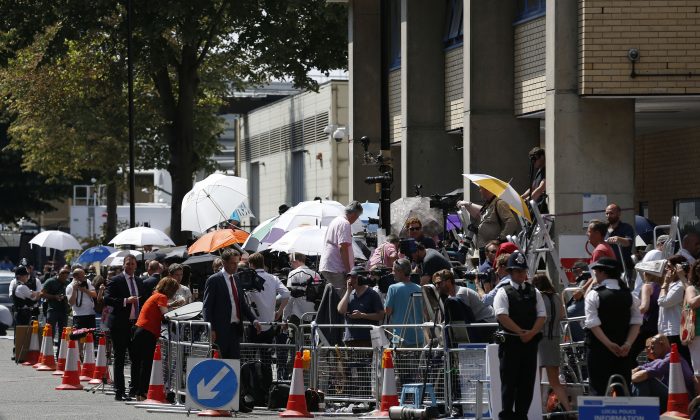 Members of media gather across from St Mary's Hospital Lindo Wing in London, Monday, July 22, 2013. Buckingham Palace officials say Prince William's wife, Kate, Duchess of Cambridge, has been admitted to St Mary's Hospital in the early stages of labour. Royal officials said that Kate traveled by car to St. Mary's Hospital in central London. Kate _ also known as the Duchess of Cambridge _ is expected to give birth in the private Lindo Wing of the hospital, where Princess Diana gave birth to William and his younger brother, Prince Harry.The baby will be third in line for the British throne _ behind Prince Charles and William _ and is anticipated eventually to become king or queen. (AP Photo/Sang Tan)
Royals

George and James have been tipped by gamblers as the top two names for the royal baby boy, who was delivered by Princess Kate on Monday afternoon.

The Guardian reported that betters have placed wages on the name of the baby. Alexandra, Charlotte, George, or James were all tipped as being the most likely names. However, since the child is male, that eliminates the first two.

Bookmakers said that George has a 7 – 1 to a 10 – 1 chance of being the baby’s name, as there have been half a dozen kings named George in the English monarchy.

James has a 12 – 1 chance. There were also numerous kings named James–two in England and six in Scotland. Kate’s brother is also named James, which is something that bookmakers are keeping track of.

The name Edward, Charles, and Michael were also tossed around, as they were also the names of kings in the past. Charles is the name of Prince Charles, the boy’s grandfather.

“Never underestimate the British public’s obsession with the royal family,” Ladbrokes spokesman Alex Donohue, who said the firm took 50,000 bets on names, told the AP. “This is such a big story. And besides, it’s summer. The weather is good.”

The child was born in the afternoon, Buckingham Palace officials confirmed.

A note posted on the outside of the palace says that “the Duchess of Cambridge was safely delivered of a son at 4:24 p.m. today.”

“Her Royal Highness and her child are both doing well,” it reads.

The Associated Press reported that the baby was born 8 lbs. 6 oz.

“Both my wife and I are overjoyed at the arrival of my first grandchild.  It is an incredibly special moment for William and Catherine and we are so thrilled for them on the birth of their baby boy,” reads a statement from Prince Charles.