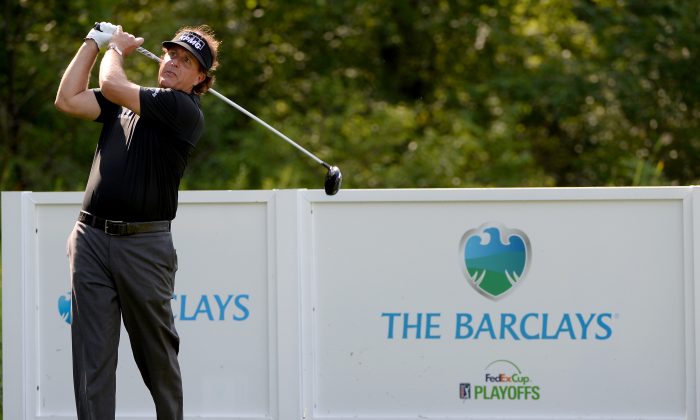 Phil Mickelson in action during the pro-am event prior to The Barclays at The Ridgewood Country Club on Aug. 20, in Paramus, N.J. (Ross Kinnaird/Getty Images)
News

Paramus, NJ—Thursday marked the start of the FedEx playoffs for the top 125 players on the PGA Tour. For the third time the event is played at The Ridgewood Country Club in Paramus, NJ.

Lost in the shuffle on who will finish high enough to advance to the second stage of the playoffs is a name few know or will even appreciate.

Before there was a FedEx Cup, or even for that matter a PGA Tour, there was a time when a fledgling group of vagabond players conducted events that comprised the heart and soul of professional golf here in America.

Golf on the professional side was miles away from the glamorous image seen today through the PGA Tour with such heavyweight stars like Tiger Woods, Rory McIlory and Phil Mickelson. In the early days professional golf was part competition, part exhibition, and part vaudeville. In most cases the most successful of players were usually in the employ of well-to-do clubs—many in the northeast United States. These clubs would allow their professional to “tour” in hope of adding publicity to the sponsoring club but the “touring pro” would also be responsible for working at the club—giving lessons and assisting with the membership in all golf related ways.

The Depression that impacted not only America but throughout the globe had a seismic impact on the development of professional golf in the 1930s. The events that existed were low key tournaments and the purses were small—with only a few high finishers making whatever money was available.

From 1933 to 1939 George Jacobus, who headed the New Jersey PGA Section for many years, became the first American-born President of the Professional Golfer’s Association of America (PGA).

Jacobus served as the head professional at Ridgewood and in his time a number of top tier players would grace the grounds of the Paramus club—most notably the Hall-of-Famer Byron Nelson who Jacobus offered a job after seeing him finish tied for ninth at the 1935 Masters. Nelson was hired as the first assistant for the sum of $400 for an entire season—plus half of his lesson fees. The incomparable sweet-swinging 23-year-old Texan would remain for a short time after laying the seeds of his considerable talents—winning the N.J. Open and the more prestigious Met Open—before moving ahead with what became a stellar playing career.

In those lean years The Ryder Cup Matches were nowhere near the kind of galvanizing and world-renowned event one sees today. Raising the money to handle the expenses in order to conduct the fifth edition of the matches was no small feat—especially for the visiting Great Britain & Ireland team. What was not known at the time was that four years later, for what would be a planned return to the States, was cancelled because of the outbreak of World War II throughout the European continent.

Jacobus was a visionary in getting Ridgewood to host the matches and, at the same time, provide for the kind of respect often times lacking for the professional game. In those years amateur golf was looked upon by many as the “gentlemen’s” way to play the game. Professional golfers were viewed by many as raconteurs analogous to card players, horse bettors and other loose money profiteers.

Captaining the American squad for the matches was Walter Hagen—arguably the most well-known professional America had produced up to that time. Hagen had won numerous events—most notably five PGA Championships, four Open Championships and two U.S. Opens (the Masters did not exist during his prime playing days). Amazingly, his 11 majors still only trails the likes of two other professional players—Tiger Woods and Jack Nicklaus.

Jacobus turned pro at age 17 and he started at the lowest level by caddying. At 21 he would be among the youngest to ever claim the head professional’s tagline when he assumed the duties at Ridgewood CC—which then was located in the Village of Ridgewood. He would become the first President of the PGA who could make such a claim in totally understanding the many facets of customer service at all levels within a golf club.

During his time as head professional, Jacobus was a visionary in understanding how to promote the game and build a future base of players in the years ahead. “The training of junior is a professional obligation. It is something we owe golf, but even more important, it is something we owe the youngsters. It gives them an introduction to the greater game in the world.” Ridgewood Country Club’s junior program started in earnest with Jacobus leading the way in 1918.

By age 33 Jacobus ascended to the PGA Presidency—the youngest ever to do so.

The Depression forced critical decision-making as clubs terminated much of their staffs. For some that action would not be sufficient and a good number of clubs were forced to close their doors permanently. With few new courses being built in the 1930s, Jacobus persuaded the PGA to retain A.W. Tillinghast —Ridgewood’s creator and the man who also designed the likes of metro NY courses such as Winged Foot and Baltusrol—to use his services as an architect-consultant and have his services “extended without fees to golf courses throughout the United States wherever a PGA member is affiliated.” In years past, clubs seeking Tillinghast were likely to have paid a far larger sum for his considerable talents. Between 1935 and 1937 Tillinghast would make no less than 400 visits—many improved through his involvement.

The members of RCC honored Jacobus with a 50th anniversary celebration on October 26, 1963. He was elected posthumously to the PGA Hall of Fame in 1983. Following a sudden heart attack George died at age 67 in 1965. He is buried in the cemetery to the right of the 4th hole on the Center Nine at the club.

Jacobus was an innovator when professional golf could very well have evolved in a far different way. To this day Ridgewood honors his memory with The George Jacobus Armageddon Tournament and the Jacobus Lounge opposite the men’s locker room is a lasting tribute to his many contributions. A picture of Jacobus greets members and their guests in a decorated display case in the golfers’ entrance.

The Ridgewood of 2014 has evolved considerably since its earliest times. Jacobus served as a critical bridge—keeping the game relevant and establishing a respect for what professional golf offers. The Barclays this week is proof on how Ridgewood CC and professional golf has fared given his efforts.