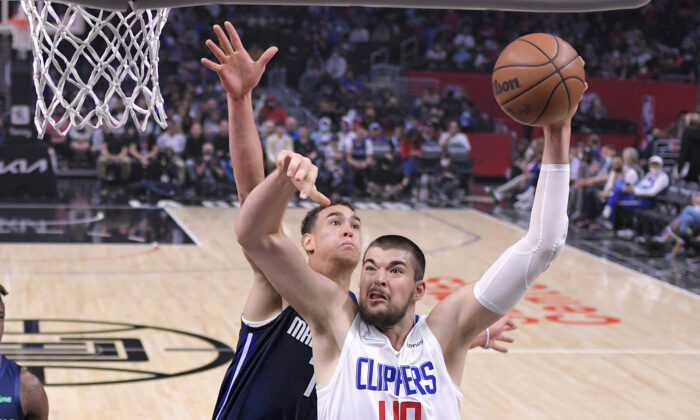 LOS ANGELES—Paul George scored 12 of his 29 points in the third quarter and the Los Angeles Clippers ended a two-game skid with a 97-91 victory over the Dallas Mavericks on Sunday.

Reggie Jackson scored eight of his 23 points in the third, when the Clippers turned a one-point halftime deficit into a nine-point lead.

Kristaps Porzingis had 25 points with eight rebounds as the Mavericks played their third consecutive game without star Luka Doncic because of a sprained left knee and ankle.

Jalen Brunson scored 20 points for the Mavericks, who have lost all three games without Doncic to open a four-game road trip.

The Mavericks led by as many as nine points in a rough-shooting first half in which both teams shot under 42% from the field. The Clippers rallied to pull within 47-46 at halftime.

The Mavericks appeared to pull within 94-91 with 52 seconds remaining after a basket by Brunson, but a foul on the Clippers’ Terance Mann was rescinded and the basket was taken away. Jackson then scored inside to give the Clippers a 96-89 lead with 29 seconds to play.

Ivica Zubac had 16 points and 10 rebounds for the Clippers in the opener of a six-game home stretch. The Mavericks shot just 20% (6 of 30) from 3-point range.

The teams were meeting for the first time since the Clippers staved off elimination in the first round of last season’s playoffs by winning Game 6 and 7 to advance.

Mavericks: Doncic went through pregame shooting drills but was ruled out on a game-time decision. … After missing nine consecutive games with a left oblique strain, F Maxi Kleber returned to score five points in 20 minutes. … G Frank Ntilikina (three points on 1-of-6 shooting) left after nine minutes and did not play in the second half because of a right calf injury.

Clippers: C Serge Ibaka was activated for the first time since Nov. 9 and for just the third time this season after a G League stint to get him up to speed after offseason back surgery. He scored six points in 12 minutes. … F Nicolas Batum was out with an illness, while G Amir Coffey made his second start in three games and just the fourth of his career.

Mavericks: Play at the Clippers on Tuesday.