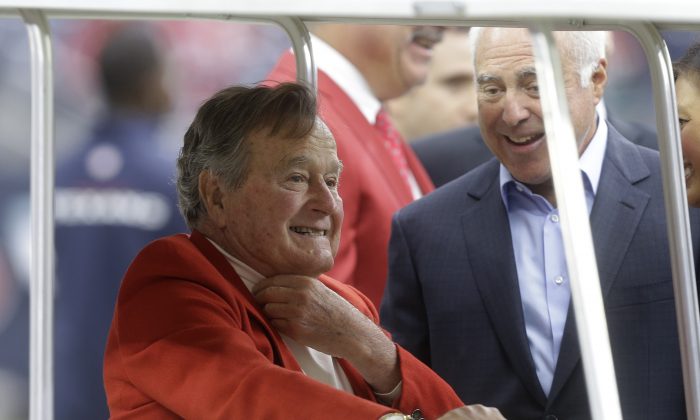 Former U.S. President George H.W. Bush sits on the sidelines before the start of an NFL football game between the Houston Texans and the Philadelphia Eagles, Sunday, Nov. 2, 2014, in Houston. (AP Photo/Patric Schneider)
US

Former president George H.W. Bush may have dementia and will likely die soon, according to a new tabloid report.

The president is currently confined to a wheelchair in his estate in Kennebunkport, Maine due to the Parkinsonism disease.

A health expert who studied recent images of the 90-year-old told the National Enquirer that Bush had “an expression on his face that indicates he doesn’t know who Michelle Obama is”–indicating that he may have dementia.

“I think he has lost quality to his life and has only a short time to live,” the expert, Dr. Gabe Mirkin, told the tabloid.

The former president is staying “more at home now than he used to be,” his confidante Ron Kaufman told the tabloid.

The 41st president of the United States “hates being sick.”

“They call it vascular Parkinsonism. It just affects the legs. It’s not painful. You tell your legs to move and they don’t move. It’s strange, but if you have to have some bad-sounding disease, this is a good one to get,” he said.

Bush said it was hard to accept.

“I love being active, [playing] sports, being in the game. … But you just face the reality and make the best of it,” he said.

Bush was hospitalized for parts of 2012 and 2013 with a severe cough in addition to other health issues.