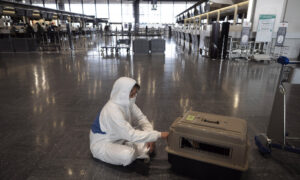 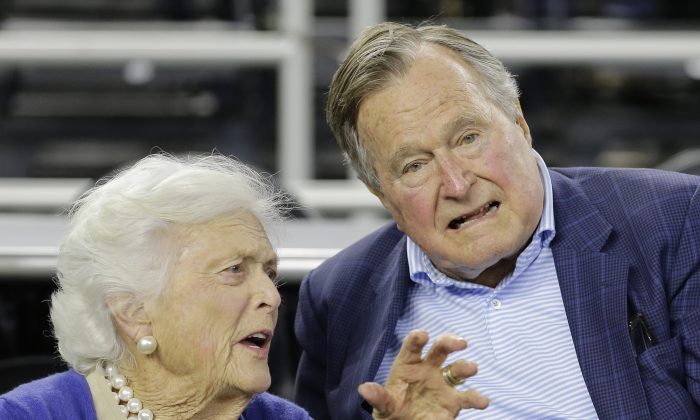 Former President George H.W. Bush and his wife Barbara Bush speak before the first half of an NCAAA college basketball game in Houston, in this file photo. (AP Photo/David J. Phillip)
US

Former President George H.W. Bush is currently in stable condition and his wife, Barbara, has bronchitis, a spokesman told CNN.

Bush, 92, was admitted to Houston Methodist Hospital to address “an acute respiratory problem stemming from pneumonia. Doctors performed a procedure to protect and clear his airway that required sedation,” spokesman Jim McGrath told the network.

On Wednesday evening, the former president was no longer sedated, and he’s in stable condition in the ICU as well as conscious, he added.

“I don’t think there’s a whole lot of money to be gained betting against George Bush,” McGrath added, according to NBC DFW. “We’re just kind of in a wait-and-see mode.”

Barbara Bush, 91, had not been feeling well and decided “to take it out of committee and have the experts check it out.” Her move to the hospital was considered a precaution.

McGrath added that Barbara has bronchitis—unlike her husband who has pneumonia, CNN reported. She is being treated with antibiotics.

George W. Bush to Be in DC Despite Dad’s Health

McGrath said doctors are encouraged by her condition.

Meanwhile, the former president sent a letter to President-elect Donald Trump, saying he can’t attend due to his health. The former president and Barbara “wish you the very best as you begin this incredible journey of leading our great country.”

“My doctor says if I sit outside in January, it likely will put me six feet under. Same for Barbara,” Bush wrote. “So I guess we’re stuck in Texas.”

Trump responded on Twitter, wishing the couple a speedy recovery. “Looking forward to a speedy recovery for George and Barbara Bush, both hospitalized. Thank you for your wonderful letter!” he tweeted.