George Floyd’s Girlfriend Speaks Out About His Death: ‘He Would Give Grace’ 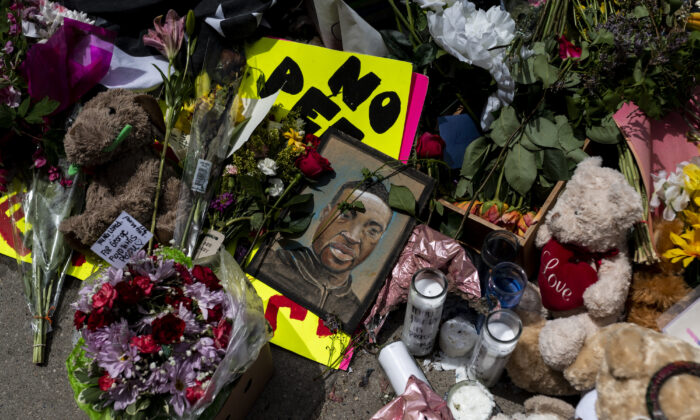 A memorial lies outside Cup Foods, where George Floyd was killed in police custody, in Minneapolis, Minnesota, on May 28, 2020. (Stephen Maturen/Getty Images)
By Tom Ozimek

Courteney Ross, the girlfriend of the late George Floyd who was pronounced dead Monday after a Minneapolis police officer was filmed kneeling on his neck, told reporters that Floyd would have objected to the chaos that has erupted after his death and would seek to forgive.

“You know, if he was here, he would say that he’s a man of God. He would stand on that firmly,” Ross told a reporter with local Minneapolis CBS news affiliate WCCO. “He stood up for people, he was there for people when they were down, he loved people that were thrown away.”

Protests erupted Tuesday, a day after Floyd’s death in a confrontation with police. In a citizen video widely shared on social media, Floyd can be seen pleading as Officer Derek Chauvin presses his knee against him. Several minutes later, Floyd stops talking and moving.

Ross said Floyd would have objected to the violence, saying that he instead “would give grace.”

“He would,” Ross insisted. “I stand on that today he would still give grace to those people.”

“You can’t fight fire with fire,” Ross told the outlet. “Everything just burns.”

Protesters torched a Minneapolis police station Thursday that the department was forced to abandon as three days of violent protests spread to nearby St. Paul and angry demonstrations flared across the U.S.

“I’ve seen it all day today. People hate. They’re hating,” Ross said, adding, “they’re hating, they’re mad, and he would not want that.”

Among other casualties of the fires was a six-story building under construction that was to provide nearly 200 apartments of affordable housing.

“We’re burning our own neighborhood,” said a distraught Deona Brown, a 24-year-old woman standing with a friend outside the precinct station, where a small group of protesters were shouting at a dozen or so stone-faced police officers in riot gear. “This is where we live, where we shop, and they destroyed it.”

The protests that began Wednesday night and extended into Thursday were more violent than Tuesday’s, which included skirmishes between offices and protesters but no widespread property damage.

In a separate interview published by the Daily Mail, Ross described Floyd as a man of faith.

“He is such a spiritual man, beyond just being prayerful and a man of God, he had a sense about him that just made you feel comforted, feel good, feel validated, just lift you up, lift your spirits up.”

She said Floyd believed Minneapolis was a “good place.”

Chauvin, the officer who kneeled on Floyd’s neck, was fired Tuesday along with three other officers involved in the arrest. The next day, the mayor called for Chauvin to be criminally charged.