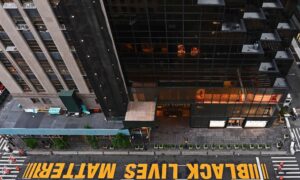 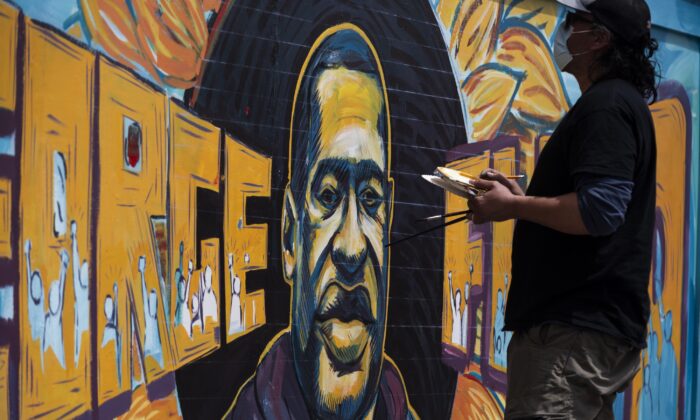 A group of artists paint a mural of George Floyd on the wall outside of Cup Foods, where Floyd died in police custody, in Minneapolis, Minn., on May 28, 2020. (Stephen Maturen/Getty Images)
US News

George Floyd Mural Near Site of Death in Minneapolis Defaced

A mural painted near the site of George Floyd’s death in Minneapolis was defaced this week, surveillance video showed.

The mural was painted on the side of Cup Foods, where an employee called police on Memorial Day due to suspicion that Floyd used counterfeit money in a purchase.

The resulting police encounter ended with Floyd dead, sparking protests and riots that continue to this day. The four police officers involved, who were fired, face murder or aiding murder charges.

Video footage and photographs from social media showed black paint sprayed on Floyd’s face and eyes and surveillance footage from late Tuesday showed a man spray painting the mural before running away.

One witness, photographer Billy Briggs, said on Facebook that he saw a white male using spray paint to deface the mural.

Marcia Howard, a teacher who is part of the area’s volunteer security force, told The Epoch Times that the suspect was eventually tracked down by a different security guard. The guard took a picture of the man smiling before letting him go.

Community members, after collecting a can of spray paint that the suspect cast aside, soon gathered back at the mural, where they found a pair of flip-flops the man left behind.

“We looked at the picture that the security guard took and realized that this man had no remorse,” Howard said. “We were like, [expletive] this guy.”

Community members then posted the picture online, along with the first name the suspect gave to the guard, and people quickly identified the suspect.

The suspect’s father told the Minnesota Reformer, a nonprofit news agency, that his son defaced the mural.

The son, Daniel Michelson, was drunk, the man said, adding that his son is “in a safe place” and “wants to do everything he can to make restitution.”

Michelson told the website that he doesn’t recall spray painting the mural, calling himself “out of control.” When he saw video footage, he said he was “absolutely disgusted.” He said he supports the Black Lives Matter movement and intends to make amends.

A Minneapolis Police Department spokesman told The Epoch Times that no report had been filed over the vandalism. A Cup Foods worker declined to comment. The Epoch Times wasn’t able to reach Michelson.

Howard accused Michelson of lying about being drunk and wondered about his motivation.

“Why? Why? Because he could. And now he’s using the excuse that he was blackout drunk, which is the excuse used by a lot of white people when they do something ‘out of character,'” she said.

The mural sits in an area of about four blocks declared an autonomous zone in early June. Community members released a list of demands this month they want met before relinquishing control back to city officials. Demands include recalling Hennepin County Attorney Mike Freeman, ending qualified immunity for police officers, and investing over $700,000 into the area for job creation and “Undoing Racism training.”

City officials planned to begin reopening the area this month but pushed back those plans indefinitely last week. Officials during a City Council meeting Thursday laid out a plan that would keep the intersection, known as George Floyd Square locally, a memorial site to Floyd.

Briggs, who has been taking pictures in the area since May, told the Minneapolis Star-Tribune that he broke down when he saw the defaced mural.

“Everybody is struggling with this,” he said. “[Floyd] is the face of justice in this movement. This was a devastating thing to do. Shame on you.”

The mural is now covered with a blue tarp.

Jeanelle Austin, lead caretaker for the Floyd memorial, told the paper that she and others are working on repairing the mural.

“It’s going to take time before changes are done,” she said. “At the end of day, we are looking for justice.”