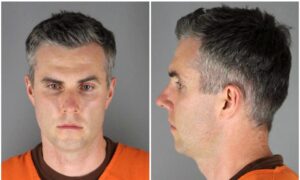 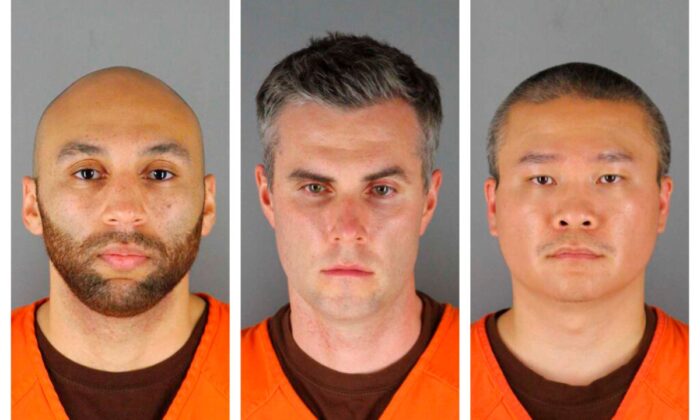 The family of George Floyd filed a lawsuit Wednesday against the city of Minneapolis and the four police officers charged in his death in May, saying that they violated his rights when he was restrained.

“This complaint shows what we have said all along, that Mr. Floyd died because the weight of the entire Minneapolis Police Department was on his neck,” Floyd family lawyer Ben Crump said in a statement.

“The City of Minneapolis has a history of policies, procedures and deliberate indifference that violates the rights of arrestees, particularly Black men, and highlights the need for officer training and discipline,” he said, adding, “This is an unprecedented case, and with this lawsuit we seek to set a precedent that makes it financially prohibitive for police to wrongfully kill marginalized people—especially Black people—in the future.”

City Attorney Erik Nilsson, in response to the lawsuit, said that criminal charges are pending against the four officers.

“It’s very important that the criminal case proceed without interference,” he said.

Floyd died while in police custody after former officer Derek Chauvin was seen kneeling on his neck for about 8 minutes. Floyd, who was handcuffed in the incident, said he couldn’t breathe.

The lawsuit was filed in the U.S. District Court in Minnesota.

Floyd’s death triggered widespread protests, riots, looting, and arson incidents across the United States, with some activists claiming that police departments need to be defunded or even abolished.

The Minneapolis City Council said it supports the move to replace the department, saying it has a history and culture of brutality. A public hearing was planned on the proposal, which requires a change in the Minneapolis city charter and needs to be voted on in November.

Mayor Jacob Frey, a Democrat, previously said he is opposed to abolishing the police.

According to The Associated Press, the family lawsuit seeks compensatory and special damages in an amount to be determined by a jury. The complaint also asks for a receiver to be appointed to ensure that the city properly trains and supervises its police officers in the future.

Last year, Minneapolis agreed to pay $20 million to the family of Justine Ruszczyk Damond, an unarmed white woman who was shot by a black officer after she called 911 to report hearing a possible crime happening behind her home. The settlement came three days after the officer, Mohamed Noor, was convicted of murdering her and is believed to be the largest payout ever stemming from police violence in Minnesota.